Side Event on the Arab Initiative to combat human trafficking 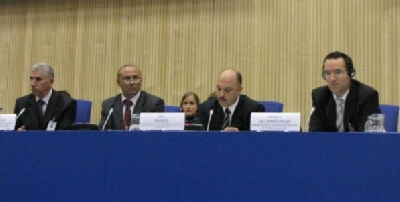 The Side Event on the Arab Initiative to combat human trafficking took place during the Fifth Session of the Conference of the Parties to the United Nations Convention against Transnational Organized Crime Conference (UNTOC) on 21 October 2010 in Vienna.

Due to its strategic location and comparatively weak control measures in some of the countries in the region, organized crime activities, such as human trafficking, are expanding in the region, and bringing increasing profits to international and local criminal organizations.

The Arab Initiative aims at supporting the Arab States in (i) preventing and combating human trafficking by promoting the ratification and implementation of the Protocol to Prevent, Suppress and Punish Trafficking in Persons, especially Women and Children, (ii) strengthening the institutional and human capacities of the criminal justice systems, (iii) improving mechanisms for the appropriate identification  referral, support, and protection of trafficked victims, and (iv) raising the awareness about the crime and its devastating consequences on individuals and societies at large.

The Side Event provided an opportunity to raise awareness about the Arab Initiative and for Governments of the Arab States to share information on the situation of human trafficking in their countries, related needs and ongoing efforts and cooperation.

UNODC, represented by Mr. Mohamed Abdul Aziz, Regional Representative for the Middle East and North Africa, and the League of Arab States, represented by Mr. Radwan Ben Khadra, Head of the Legal Affairs Department and Legal Adviser to the Secretary-General of the League of Arab States, presented the scope of the Arab Initiative. The Governments of Egypt and Norway, represented by Judge Adel Maged, Vice President of the Egyptian Court of Cassation and Expert Adviser on Human Trafficking to the League of Arab States, and Mr. Trond H. Glomnes Rudi, Senior Adviser, Section for Global Initiatives and Gender Equality, Norwegian Ministry of Foreign Affairs, elaborated on their involvement and commitment. The speakers focused their presentations on the need for national capacity building, the importance of ratifying the Human Trafficking Protocol, the necessity to strengthen regional and international cooperation and agreed that a comprehensive Arab strategy is needed in order to effectively address these issues in the region.

The Arab States reconfirmed their commitment to the Arab Initiative and reported on progress and latest development in their respective countries in this regard.

Jordan confirmed that it has ratified the Human Trafficking Protocol, that a special unit to combat human trafficking has been established and that awareness campaigns and capacity building of relevant national agencies are underway.

Algeria stated that human trafficking has been criminalized in the country and Iraq informed that a draft law will be adopted soon.

Moreover, Qatar expressed that it supports the Arab Initiative, which is within the framework of Qatar's response to human trafficking.

In early 2011, UNODC and the League of Arab States will launch a project -- financed by Norway, to operationalize the Arab Initiative.

The project - Strengthening the framework of the Arab region to prevent and combat human trafficking - aims at supporting the Arab States in the following areas:

Protocol to Prevent, Suppress and Punish Trafficking in Persons, especially Women and Children