Vienna, 17 May 2018 - Smuggling of migrants is, by its very nature, a transnational crime requiring a transnational response. Considering the cross-border nature of the smuggling of migrants and its ever-increasing negative impact on the States and people of Eastern Africa, this crime cannot be sufficiently countered by any single country alone. This transnational threat requires a multijurisdictional response - a response that will see effective criminalization across the region, enhanced national criminal justice capacity to prevent, suppress and prosecute this crime, and improved international cooperation, including within the region. Hence, in order to discuss the need for a common political approach and policy harmonisation against migrant smuggling in Eastern Africa, UNODC together with GIZ presented a side event on "Countering Smuggling of Migrants in Eastern Africa - towards a Regional Plan of Action" during the 27th session of the Commission on Crime Prevention and Criminal Justice (CCPCJ). 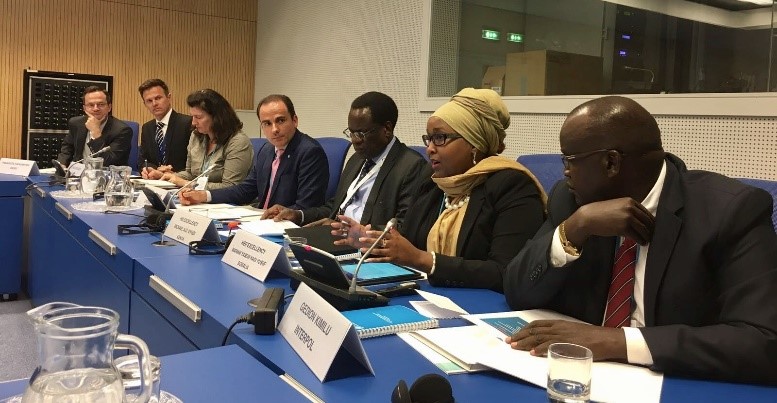 The event focused on UNODC's assistance on the development of a Regional Plan of Action to Counter Smuggling Migrants in Eastern Africa. This Plan aims to promote ratification or accession to the United Nations Convention against Transnational Organised Crime (the Convention) and its Protocol against the Smuggling of Migrants, at facilitating effective implementation of these legal instruments at national level, and at enhancing regional and international coordination and cooperation in the investigation, suppression and prosecution of smuggling of migrants, whilst simultaneously protecting the rights of smuggled migrants. During the event, panellists together with participants discussed on how to develop a coherent, comprehensive and coordinated approach to enhance international cooperation in the region and beyond.

Ambassador Oyugi emphasised the importance of strengthening regional and international cooperation as the fight against the smuggling of migrants requires a transnational approach to be effective. He also reiterated that the region is particularly vulnerable to smuggling of migrants - and inevitably to trafficking in persons -and that no country is able to counter the problem on its own. He expressed his appreciation to UNODC for its support to develop a regional plan of action, which, according to Ambassador Oyugi, will provide an important framework to enhance cooperation among countries in the region.

In turn, Dr de Andrés, highlighted the importance of ratifying and implementing the Convention and its Protocol against the Smuggling of Migrants, which are the primary international legal instruments to counter the smuggling of migrants and related activities. 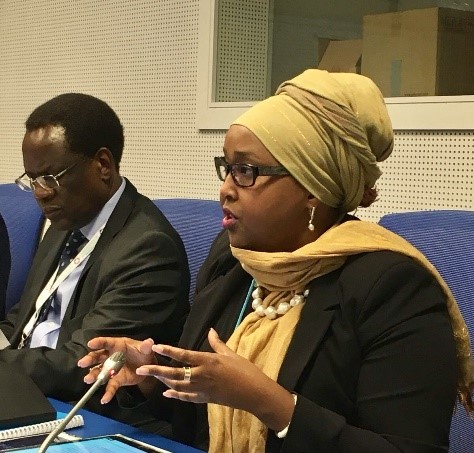 Ambassador Hagi Yussuf shared her experiences in dealing with the immediate needs of vulnerable smuggled migrants whom she met in Libya. She quoted a child who said "the smuggler used to wake me every night to beat me. Beating was a wake-up call". According to Ambassador Hagi Yussuf, "it is time to work together as a region and, as such, the Federal Government of Somalia is ready to collaborate with neighbouring countries and international organisations". The Ambassador also expressed her gratitude to UNODC and the BMM programme for its efforts in harmonising policy and legislation, protecting smuggled migrants, victims of trafficking, survivors and witnesses, and for strengthening investigation, prosecution and intelligence sharing to dismantle criminal networks.

During his presentation, Mr. Kruger underscored that the fight against smuggling of migrants required a multi-jurisdictional and transnational approach. According to Mr. Kruger, a regional plan of action will go a long way to enhance and ensure much needed regional harmonization, coordination and cooperation in Eastern Africa to deal with this crime. The Plan would also incorporate protection for vulnerable smuggled migrants as potential victims of trafficking, and will promote intelligence sharing, exchange of information, and strengthen the ability of Member States to engage in joint investigations and mutual legal assistance. In this regard, Mr. Papadimitriou and Mr. Kruger affirmed that UNODC's expertise will help Eastern African Member States in their efforts to combat smuggling of migrants, and that the Regional Plan of Action will form a strong foundation for continued cooperation with Member States in Eastern Africa.