In July 2008, the Ibero American Association of Public Prosecutors Offices (AIAMP), the highest political penal prosecution instance in the region, resolved to recognize UNODC project against trafficking in persons (XCAS26) in Central America as a model program to be replicated in other countries. 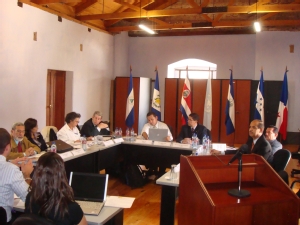 Focused on strengthening investigative capacities of prosecutors and police services, the XCAS26 program brings to the table an innovative methodology in the provision of technical assistance: training material and trainer's guidelines are produced jointly with the beneficiaries of the project. Felipe De La Torre, UNODC crime prevention expert and project coordinator based in Mexico City comments: "By involving our future trainees in the actual elaboration of tailor-made capacity building tools, UNODC is able to ensure a legitimate and democratic process that empowers public officials and suits real needs". UNODC and its partner ILANUD (United Nations Latin American Institute for the Prevention of Crime and Treatment of the Offenders) are currently carrying out workshops in each Central American country in order to enrich and validate these tools which will serve as the basic material for an intensive training phase beginning in 2010.

At the institutional level, UNODC has promoted the establishment of the Central American network of directors of training units of Attorney General's Offices (AGOs), aimed at harmonizing knowledge on trafficking in persons and how it will be imparted in the region, and enhancing the exchange of cooperation among training centers. Under the auspices of UNODC, a second meeting of this network will take place in September in El Salvador to approve a comprehensive training strategy for 2009-2012; and a train-the-trainers course will be held in November in Panama to establish a pool of regional facilitators who will be tasked with leading training sessions in all countries, with a special focus on rural areas.

Invited by the AIAMP, UNODC took part in the first Ibero American Summit of Public Prosecutors Offices against trafficking in persons in Santiago de Chile in December 2008. This high-level event - also attended by the Chilean President, Ms Michelle Bachelet - was a great opportunity to show the progress made in Central America in the field of trafficking in persons, and to establish means of future cooperation for this region with the US Department of Justice and the Chilean AGO which is carrying out a technical assistance project together with the German and Chilean International Cooperation agencies.

"Inter-agency cooperation is key for the success of our regional project; we are committed to optimize resources and avoid the duplication of efforts", says Felipe De La Torre. "UNODC's participation in the Second Meeting of National Authorities on Trafficking in Persons hosted by the Organization of American States (OAS) in Buenos Aires in March, enabled UNODC to align its actions with other initiatives of the region." 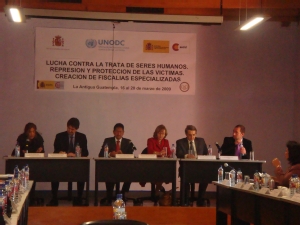 Joint efforts have been made with the Spanish Attorney General's Office and the Spanish Cooperation Agency for Development (AECID) to put together a one week course for Mexican, Central American and Caribbean prosecutors and police officers on techniques to investigate trafficking in persons, in La Antigua, Guatemala, in March 2009.

Mexico is also becoming an active partner in the implementation of UNODC regional project; in April 2009 the Mexican Attorney General's Office (PGR), the US Department of Justice and UNODC co-hosted a workshop on interviewing techniques for victims of trafficking in Guadalajara, Jalisco State; more workshops of this kind will be held in the second semester of 2009 to promote the exchange of good practices between Mexican and Central American investigators. In addition to this, FEVIMTRA (Specialized Unit on Violence against Women and Trafficking in Persons) within the PGR has asked UNODC to participate in a regional seminar to share expertise in the provision of assistance to victims of trafficking in persons in the South-South East of Mexico.

Furthermore, UNODC was invited to take part in a conference in April on trafficking in persons organized by the US Narcotic Affairs Section in Cochabamba, Bolivia, where a presentation of the UN Convention against Transnational Organized Crime and its Protocols was delivered to public officials and civil society.

"Not only training and inter-agency cooperation but also the promotion of mutual legal assistance to expedite trafficking in persons cases constitutes one of our main concerns", concludes De La Torre. "Central American international cooperation units within AGO's must be strengthened and trained in order to handle this and other offences which are of transnational nature". The valuable work developed by ILO/IPEC in this field will be continued under a special chapter of the XCAS26 that aims at establishing a Central American network of international cooperation focal points. A first training workshop was held by ILO, UNODC and ILANUD in El Salvador in April 2008 with the participation of guest experts from Colombia and Mexico. 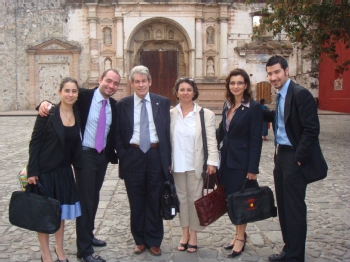 A recent contribution from Spain will enable UNODC to continue working together with Central American authorities, and other international organizations, to prevent and better prosecute trafficking in persons. A complementary component on communication to sensitize the community and promote the participation of the private sector in the prevention of trafficking around the recently launched " blue heart" campaign is being also developed in cooperation with ILANUD.

More information about this project can be requested to: mariana.alegret@unodc.org