Governance and the rule of law in East Africa: UNODC's support for training and infrastructure in tackling piracy 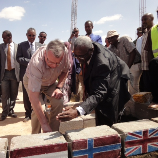 19 November 2012 - Good governance and the rule of law are two areas seen as crucial in building a safer world for all. However, in areas which have been devastated by war and unrest, public institutions which work to provide this security can be lacking. As part of UNODC's assistance in strengthening this, the organization's Executive Director, Yury Fedotov, this week visited Eastern Africa, including Puntland which for years suffered from civil war and is busy re-building its institutions with UNODC's assistance.

With piracy one of the leading security concerns in this area, UNODC's Counter-Piracy Programme, which has been operational since 2009, is working to tackle this crime. Discussing ongoing progress in this area, Mr. Fedotov met with Puntland's President, Abdirahman Mohamud Farole, and the Prison Commissioner, General Cali Nour, and took part in the inauguration of a new training academy and the Ministry of Justice which have recently been constructed by UNODC. The academy aims to build national capacity and advance the criminal justice system in Puntland, as well as improve conditions for staff and prisoners alike through the training of prison guards and other public officers.

Mr. Fedotov also attended the site of a new prison which is to be built in Puntland by UNODC. This prison, which will house some 500 prisoners, is part of a comprehensive programme in Puntland being rolled out by the organization and covers both the construction of facilities as well as training and mentoring of staff at various levels.

During his trip, Mr. Fedotov stressed the need for an inclusive approach in tackling piracy and spoke on the importance of UNODC's Advocacy Campaign within this area: "We must remember that along with law enforcement efforts, reaching out to various influential groups like religious leaders, traditional elders, women and the business community is very important as a preventive effort in countering piracy. This group needs to be sensitized on the ill effects of piracy and their voices should also help in preventing piracy".

He also noted that it is vital that youth, who are particularly vulnerable, be offered alternative livelihoods - a key area covered under UNODC's work.