Drug Use and HIV

People who use drugs have multiple vulnerabilities to HIV, tuberculosis, hepatitis and other infectious diseases.

1.4 million are living with HIV

5.6 million are living with hepatitis C

1.2 million are living with both HIV and hepatitis C

The WHO/ UNODC/UNAIDS Technical Guide to reduce HIV infection among people who inject drugs (PWID) sets out nine interventions proven effective in reducing HIV transmission among this population. Universal access to the comprehensive package of nine interventions is a priority. Of these nine, the first four have been identified as the most effective in reducing the spread of HIV: when delivered at scale the four can contain and reverse the upward trend of HIV epidemics among PWID.

WHO has also recommended opioid overdose management with community distribution of naloxone for overdose prevention. Opioid overdose is both preventable and, if witnessed, treatable (Consolidated Guidelines on HIV Prevention, Diagnosis, Treatment and Care for Key Populations, WHO 2016). 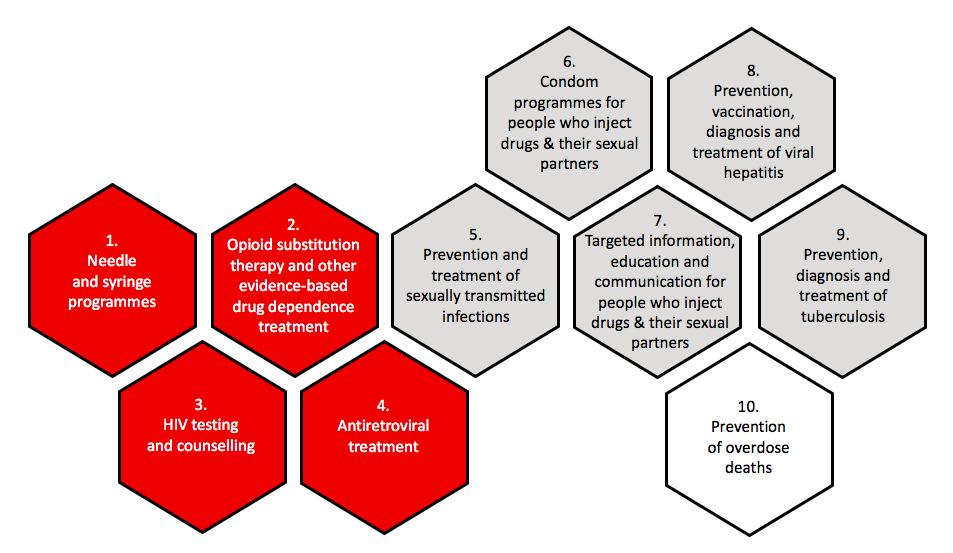 A comprehensive package of interventions for the prevention, treatment and care of HIV among people who inject drugs

In most countries, coverage of HIV prevention services for people who inject drugs is too low to have an impact on the HIV epidemic.

HIV prevention, treatment, care and support for people who use stimulant drugs

Promoting access to HIV services for people who inject drugs

Responding to specific needs of women who inject drugs