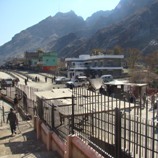 17 February 2011 - On 15 February, the first inter-agency border liaison office was opened at the border between Pakistan and Afghanistan in a move aimed at curbing the flow of illicit drugs in that region. Supported by UNODC, the border liaison office is situated at one of the busiest ports of entry for people and goods moving between Pakistan and Afghanistan - the historic Khyber Pass.

Speaking at the inauguration of the office, Jeremy Douglas, UNODC Representative in Pakistan, noted that the opening of the first such liaison office in the region was a major achievement for Pakistan, and one which UNODC took great pride in facilitating.

"As the destination and transit country for over 40 per cent of the opiates produced in Afghanistan as well as a key transit country for precursors, Pakistan's borders are particularly vulnerable, and we hope the border liaison office at Torkham will make a contribution to countering some of the trafficking and linked transnational organized crime", said Mr. Douglas.

Located at the border between the Federally Administered Tribal Areas of Pakistan and Nangarhar province of Afghanistan, the border liaison office lies at a dangerous junction in the international fight against drugs. In view of that fact and of the critical importance of inter-agency cooperation in tackling drugs in the region, the border liaison office brings together members of the Khyber Pakhtunkhwa Frontier Corps, the Political Administration Khyber Agency, the Pakistan Customs Collectorate, the Federal Investigation Agency, the Anti-Narcotics Force and, in the near future, the National Logistics Cell.

Equipped with computers, communications equipment, training materials, drug and precursor test kits and safety equipment, the office represents a new front in the region's fight against drugs and other forms of transnational crime. It will be linked to a border liaison office located in Afghanistan during the planning stage.

The border liaison office at Torkham is being established within the framework of the Triangular Initiative, a UNODC-led group whose membership comprises the drug control ministers of Afghanistan, the Islamic Republic of Iran and Pakistan and the objective of which is to strengthen cooperation in law enforcement between those three countries.

Border liaison offices are designed to ensure an operational inter-agency and cross-border response against trafficking in drugs and illicit precursors and other forms of transnational organized crime. By facilitating the exchange of information among law enforcement agencies and offering a location at which representatives of Pakistan and Afghanistan can meet frequently, the border liaison offices are key tools in tackling such crime.

With more than 90 per cent of the world's opium and heroin originating in Afghanistan, border liaison offices and the work of such bodies as the Triangular Initiative are helping to shape stepped-up efforts to strengthen cooperation and border security. Critically, the nature of drug trafficking can be devastating to countries nearby, which is a further reason for enhancing regional cooperation through initiatives such as border liaison offices.