Research on Trafficking in Persons

PreviousNext
Human trafficking is the acquisition of people by improper means such as force, fraud or deception, with the aim of exploiting them. It is a serious crime and a grave violation of human rights. Every year, thousands of men, women and children fall into the hands of traffickers, in their own countries and abroad. Victims are exploited in restaurants, farms, construction sites, brothels, factories, markets, mines and in people’s homes everywhere. As guardian of the United Nations Convention against Transnational Organized Crime and the supplementing Protocol to Prevent, Suppress and Punish Trafficking in Persons, Especially Women and Children, UNODC is uniquely placed to undertake research of global scope on the crime of human trafficking. Currently, the main research output on this topic is the biennial Global Report on Trafficking in Persons, which is largely based on official, national data and analyses the patterns and trends of trafficking globally, regionally and at the country level. UNODC is also advancing the work on testing methodologies for estimating the total number of victims of trafficking in persons. Not only will this help uncover the real magnitude of the trafficking crime – which has so far been an elusive target for the trafficking research community - but it will also assist countries in measuring progress towards the attainment of three Sustainable Development Goals (goals 5, 8 and 16 all include targets on trafficking in persons). 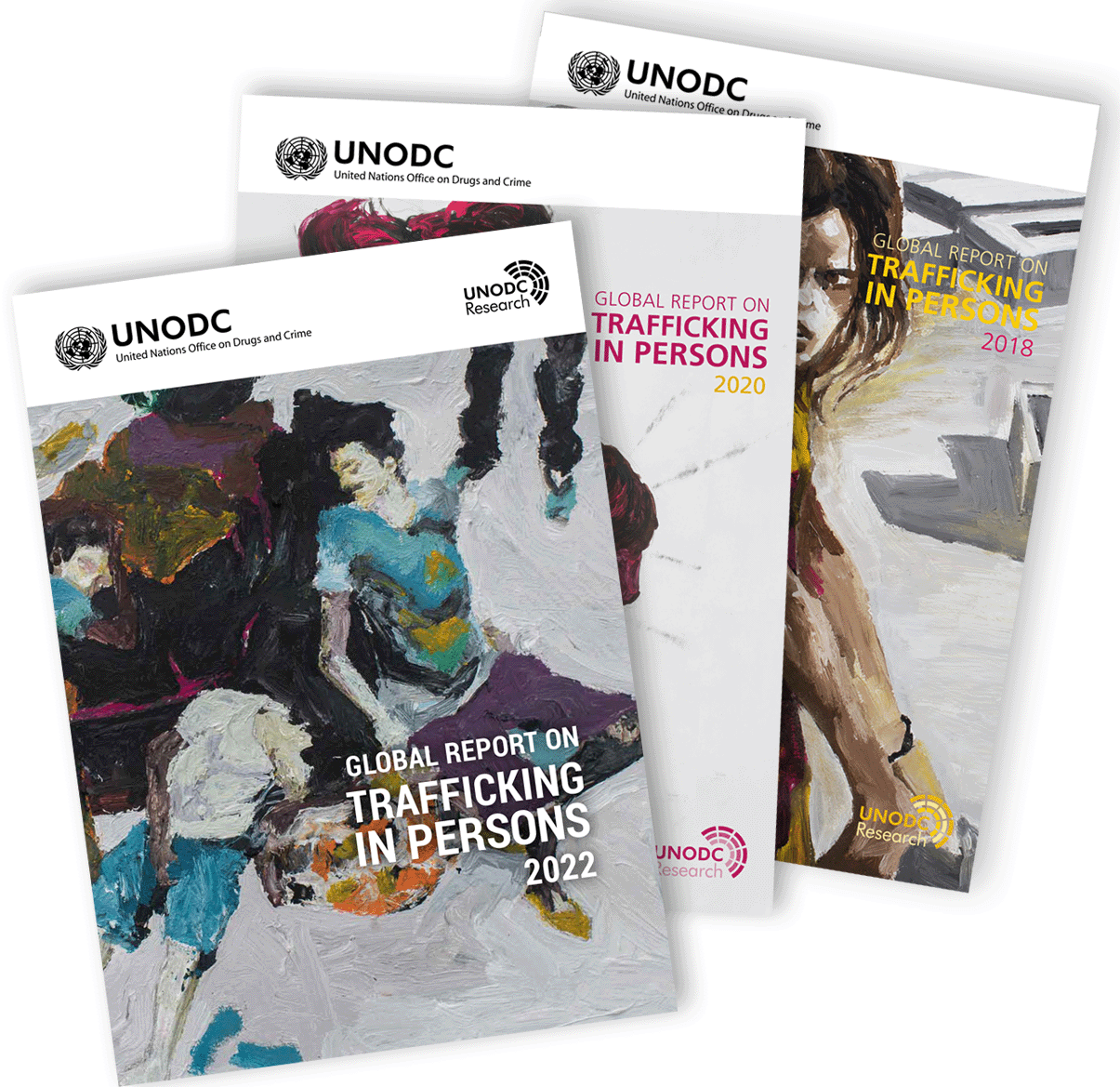 In response to a mandate from the General Assembly, expressed in the 2010 United Nations Plan of Action to Combat Trafficking in Persons (A/RES/64/293), the UNODC Crime Research Section produces the biennial Global Report on Trafficking in Persons. Drawing primarily on official national information collected from countries all over the world, the Global Report presents data and analyses of human trafficking at the national, regional and international levels.

UNODC Research also produces analytical briefs on key trafficking issues, such as TIP in the context of the conflict in Ukraine.

The UNODC Human Trafficking and Migrant Smuggling section also produces a range of reports and publications on trafficking in persons.

The United Nations General Assembly-mandated Inter-Agency Coordination Group against Trafficking in Persons (ICAT), for which UNODC has been assigned a coordinating role, also regularly publishes studies and reports (http://icat.network/publications).

In 2020-2021, UNODC is implementing a project to strengthen the availability and collection of human trafficking data in the Pacific, including the generation of baseline data on trafficking prevalence. The project will culminate in the publication of a regional report at the end of the project period.

In 2021, UNODC is undertaking pilot research to apply a community safety audit methodology to analyse trafficking in persons flows from Albania to the United Kingdom. The goal of the project is to increase the understanding of the nature and characteristics of the trafficking flow at the community level and to translate the findings into evidence-based and locally driven policy initiatives and awareness campaigns to prevent this trafficking flow, which seems to have grown significantly in recent years.

UNODC is the custodian agency of SDG indicator 16.2.2, number of trafficking victims per 100,000 population, by sex, age and form of exploitation. To enable Member States to report on this indicator, UNODC is trialing two approaches. Countries with sound data collection capacity and a minimum number of reported victims may use Multiple Systems Estimation, a statistical technique that permits estimation of the ‘hidden figure’ on the basis of national data on trafficking victims from several different sources. UNODC has worked with four countries to carry out such estimates, namely the Netherlands (comprehensive report), Romania (summary report), Ireland (summary report) and Serbia (summary report). The Manual for monitoring human trafficking prevalence through Multiple Systems Estimation (English, French, Spanish) outlines the principles to apply this method, covers data protection issues and describes how estimates can provide useful insights on the profile of the victims and on the more severe forms of trafficking. Other countries may use specialized surveys. As part of the Pacific regional project, UNODC is carrying out a household survey in Fiji to estimate trafficking prevalence using the network scale-up method.

UNODC’s data on detected victims of trafficking in persons as well as on trafficking offenders can be downloaded from the UNODC data portal, dataUNODC.