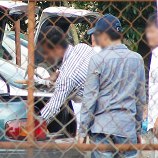 15January 2013 - Myanmar took an important step recently by joining the ongoing regional counter-smuggling effort supported by UNODC in the Greater Mekong Subregion. The project PATROL ( Partnership Against Transnational crime through Regional Organized Law Enforcement) already links Cambodia, Thailand and Viet Nam with UNODC in an effort to counteract transnational organized crime in all its forms - including the smuggling of migrants, drugs, chemical precursors, natural resources and hazardous substances.

In signing the PATROL agreement, Police Major General Kyaw Kyaw Tun, Chief of the Myanmar Police Force said that: "The Myanmar Police Force and UNODC have a long-standing cooperation in combating cross-border crimes pertaining to drug trafficking. However, with the prospect of our ASEAN Economic Community coming into force by 2015, there is an increasing risk of larger numbers of trafficked people and goods. The PATROL project thus becomes an essential part of our strategy to strengthen the capacity of frontline enforcement officers." The Chief of Police continued: "We expect that PATROL will also promote effective cross-border cooperation with our neighbouring countries as we collectively attempt to counter transnational organized crime."

In the past decade, UNODC's work in Myanmar has concentrated on finding alternatives to poppy cultivation and dealing with the HIV/AIDS problems associated with injecting drug use.

Following signature of the agreement, the Myanmar Police Force and UNODC (as well as project partners like Freeland Foundation, TRAFFIC and UNEP) will start immediately to develop joint activities for 2013 and beyond. Priority will be given to establishing new Border Liaison Offices along the Myanmar-Thailand border and providing training on anti-smuggling investigations.

At the signing of the agreement with the Myanmar Government at the UNODC Regional Centre in Bangkok, UNODC Regional Representative, Mr. Gary Lewis expressed confidence that, through PATROL, Myanmar - along with its neighbouring countries - would succeed in reducing the extent of illicit trafficking across their respective borders. "UNODC continues to support the reform process already underway in Myanmar by strengthening the Government's effort to improve human security, health and alternative development," he said.