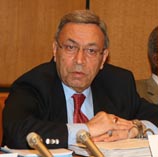 Vienna, 9 January 2013 - Professor Hamid Ghodse, a member of the International Narcotics Control Board (INCB) since 1992 and its President on six separate occasions, passed away on 27 December 2012 after a short illness. Throughout his time at the INCB, Professor Ghodse devoted himself to promoting international drug control and to the protection of people's health all over the world.

"I was deeply saddened to hear of Professor Ghodse's death", said UNODC's Executive Director Yury Fedotov. "He dedicated his life to monitoring the implementation of the UN drug conventions, and to the tireless promotion of the principles that benefit the victims of illicit drugs everywhere. I was proud to call him not only my colleague, but also my personal friend."

As a member of the INCB, Professor Ghodse made a significant contribution to the development of international cooperation in the area of illicit drug control. Over the years he worked tirelessly to ensure adequate access to narcotic analgesics and other internationally controlled drugs for legitimate medical and scientific purposes. He also led a series of initiatives that helped prevent drug abuse and promoted the treatment, rehabilitation and social integration of persons suffering from drug addiction.

Professor Ghodse was a Professor of Psychiatry and of International Drug Policy, University of London and Director, International Centre for Drug Policy, St. George's University of London, and held numerous other positions. In an impressive academic career in the field of substance abuse, he authored and edited over 350 scientific books and papers on drug-related issues and addiction.

The International Narcotics Control Board (INCB) is an independent expert body responsible for monitoring the implementation of the international drug control conventions. It was established in 1968 in accordance with the Single Convention on Narcotic Drugs of 1961.