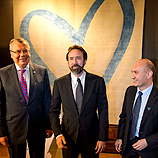 6 November 2013 - The United Nations Voluntary Trust Fund for Victims of Trafficking in Persons yesterday received a $185,000 boost from the private sector at a fund-raising event in Vienna attended by acclaimed Hollywood star Nicolas Cage. A specially designed "Blue Heart" carpet - an international symbol increasingly adopted in the fight against human trafficking - was auctioned at the event, as was another rug donated by Mr. Cage for that purpose. Mr. Cage signed these one-off works as a gesture of his support for this cause. Significant contributions were also made by guests at the gala, including some of the most influential individuals in Austria. Proceeds from the event will go the Trust Fund, which supports grassroots organizations that rescue, shelter and reintegrate victims into society.

Mr. Cage, UNODC's Goodwill Ambassador for Global Justice, called for greater efforts to assist human trafficking victims, stressing the international community cannot "stand quietly on the sidelines" while this scourge persists across the globe. "I hope you can open your hearts to this worthy cause. I hope you can help us give these victims a chance at the life they deserve".

Yury Fedotov, UNODC Executive Director, thanked donors for their contributions. "If all business leaders, public figures and citizens were as willing to devote their time and resources to this fight, we could surely defeat the criminals, and stop them exploiting millions of vulnerable women, men and children. But the truth is, we are far from winning this fight," he cautioned, urging every sector of society to join forces - the UN, Governments, NGOs, the private sector, community leaders and ordinary citizens - to stop this terrible crime.

Human trafficking affects every country in the world. Victims are trafficked for sexual exploitation and forced labour. A recent UNODC report found that women and girls make up 75 per cent of detected victims, with girls constituting two out of every three child victims. Since 2010, $1.5 million have been contributed to the Trust Fund. Thanks to this money, 11 grass-roots organizations around the world have been able to support victims and survivors of trafficking, especially women and children.

The event was organized by Austrian businessman and philanthropist Ali Rahimi and held under the auspices of UNODC.