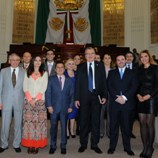 29 November 2013 - UNODC Executive Director Yury Fedotov, on an official visit to Mexico on 27 and 28 November 2013, met with the new administration of President Peña Nieto to discuss global and regional issues related to drug control and the fight against transnational organized crime.

"The commitment of the Mexican authorities to putting forward new approaches to drug and crime prevention represent a formidable opportunity and valuable resource," said Mr. Fedotov.

At his meeting with the Vice-Minister of Foreign Affairs, Ambassador Juan Manuel Gómez Robledo, Mr. Fedotov expressed his appreciation for the government's engagement in the fight against drugs and transnational organized crime. He reiterated the readiness of UNODC to expand collaboration with the Government on national, regional and global levels through the first UNODC Liaison and Partnership Office, established in Mexico in 2012.

Meeting with Attorney General Jesus Murillo Karam, he commended efforts to strengthen the administration of justice in the country, and offered the support of UNODC, in particular to contribute to the implementation of the adversarial system throughout the country.

The importance of Mexico in the Latin American region also called for a renewed South-to-South dialogue to take full advantage of the mutual legal cooperation instruments of the UN conventions on drugs, transnational organized crime and corruption, he said. In particular, Mr. Fedotov expressed his satisfaction with collaboration in the areas of smuggling of migrants and illicit crop monitoring, where initial achievements can already be seen.

Meeting with Vice-Minister Roberto Campa Cifrián from the Ministry of Interior, Mr. Fedotov discussed Mexico's approaches to crime prevention and the promotion and protection of human rights. UNODC`s expertise on prison reform and on human trafficking was offered, and UNODC's chief praised Mexico for the key role they have played in the Blue Heart campaign.