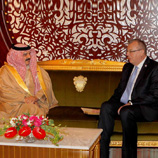 30 January 2014 - UNODC Executive Director Yury Fedotov paid an official visit to the Sultanate of Oman, United Arab Emirates (UAE) and the Kingdom of Bahrain to discuss strengthening UNODC initiatives in the Gulf region.

In meetings with H.M. the King of Bahrain, Hamad bin Isa Al Khalifa, as well as ministers and senior officials in all three countries, Mr. Fedotov thanked the governments for their support, and discussed UNODC work in the areas of drug control, crime prevention and criminal justice reform.

"The countries of the Gulf region are important strategic partners. I welcome this opportunity to further strengthen our work in the Gulf countries and to promote regional and inter-regional cooperation to combat drugs and crime, as well as expand evidence-based drug treatment and rehabilitation services," said Mr. Fedotov.

During the visit, which took place from 19 to 23 January 2014, Mr. Fedotov also attended a signing ceremony hosted by the Deputy Prime Minister and Minister of Interior of the UAE, Lieutenant General Sheikh Saif bin Zayed Al Nahyan, for the establishment of a strategic partnership between UNODC and Abu Dhabi Police GHQ in the area of forensic science.

In Oman, the Executive Director was given a tour of port facilities, and met with the Minister of Health, Dr. Ahmed Bin Mohammed Al Saidi, as well as Prosecutor-General Hussain Bin Ali Al Hilali to discuss national drug control strategies to address drug demand and supply challenges, and partnership potential in the fields of criminal justice and law enforcement.