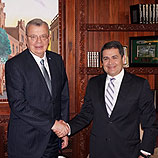 Mr. Fedotov welcomed the government's recent announcement that the country's homicide rate had decreased in 2014.

"The Government has reported a very welcome drop in the homicide rate, and UNODC is committed to supporting these significant efforts," he said. "As UN Secretary-General Ban Ki-moon also emphasized on his recent visit to Honduras, we note the measures to improve the security situation and commend the President for the leadership and commitment to protect human dignity and human rights."

The Executive Director emphasized the importance of UNODC's strong partnership with Honduras and the region.

"I welcome this opportunity to meet the President and government officials to discuss how we can further strengthen this cooperation and improve responses against drugs and organized crime," he said, following a press conference on 19 January with the Ministers of Foreign Affairs, Security and Defence in Tegucigalpa.

He also visited the offices of the Statistical Online Police System and the Observatory of Coexistence and Citizen Security to discuss their work.

Mr. Fedotov will continue his visit to the region in Nicaragua to meet with the President and government officials.