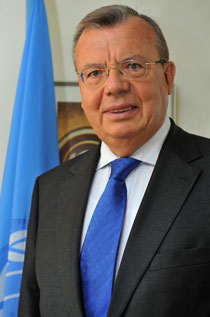 From 2002 to 2005 Ambassador Fedotov served as Deputy Minister of Foreign Affairs of the Russian Federation for International Organizations. As a member or head of Russian delegations he took part in many international conferences and forums such as sessions of the General Assembly, ECOSOC, UN Commission on Human Rights, UNIDO, UNESCO, WFP, UN ECE, ESCAP etc. In his personal capacity, he was also a member of the College of Commissioners of the UN Commission on Monitoring and Verifications in Iraq (UNMOVIC).

From 1999 to 2002 Mr. Fedotov was Director of the Department of International Organizations, Member of the Board of the Ministry of Foreign Affairs of the Russian Federation. Prior to that, from 1993 to 1999 he was Deputy Permanent Representative of the Russian Federation to the United Nations in New York, where he dealt with Security Council and General Assembly affairs as well as other numerous issues related to leading United Nations bodies and organizations. From 1988 to 1993 Mr. Fedotov worked in the Foreign Ministry in Moscow as Deputy Director of the Department of International Organizations.

Mr. Fedotov started his foreign service in 1972 as a member of the USSR delegation to the United Nations Disarmament Committee in Geneva. He subsequently took up a number of diplomatic assignments in Moscow, as well as at the Embassies in Algeria and India.

Mr. Fedotov is a career diplomat. He graduated from the Moscow State Institute of International Relations (MGIMO), speaks fluent English and French and has a basic knowledge of German.

Mr. Fedotov was born on 14 December 1947, he is married, has a son and a daughter, as well as three grandchildren.