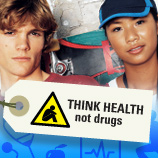 25 June 2010 - On 26 June, the world will commemorate the International Day against Drug Abuse and Illicit Trafficking, which serves as a reminder of the need to combat the problems illicit drugs pose to society.

"We must recognize the major impediment to development posed by drug abuse and illicit trafficking," said Secretary-General Ban Ki-moon in his message. Cultivating illicit crops and producing drugs threaten the environment, taking drugs puts the health of users at risk and the illicit drug trade undermines the rule of law.

To cultivate coca, for example, farmers cut trees and use a lot of water. Deforestation and erosion are the result. The chemicals used to produce cocaine cause further damage to the environment, as they poison locals streams. Farmers, their families and communities become poorer, as their land is their livelihood.

For its part, drug trafficking erodes governance and institutions. "Drug traffickers typically seek routes where the rule of law is weak. In turn, drug-related crime deepens vulnerability to instability and poverty", Mr. Ban said. West Africa and Central America are two regions affected by the flow of drugs transiting from drug-producing countries to drug-consuming countries.

Once drugs enter the markets, the health of consumers is at stake. Drug use can cause a number of physical and psychological problems, some serious. Drug use is linked to hepatitis and HIV, for instance. In fact, injecting drug use is a leading cause of the spread of HIV.

What can be done to deal with these issues? Focus on development and achieving the Millennium Development Goals (MDGs). We must put an end to poverty and hunger, improve health, combat HIV/AIDS and ensure environmental sustainability. "Our work to achieve the MDGs and fight drugs must go hand-in-hand", Mr. Ban said.

UNODC is assisting States in their efforts to provide sustainable development alternatives for farmers and their communities, to enhance justice and reduce corruption, to prevent drug use and to treat those who need health-care services. Everyone has a role to play. As Mr. Ban said, on this day it is important to "reaffirm our commitment to this shared responsibility within our communities, and among the family of nations". As the theme of the world drug campaign stresses, "it is time to think health, not drugs".