Afghan opium production halves in 2010, according to UNODC annual survey 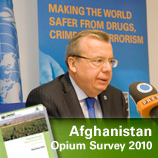 "This is good news but there is no room for false optimism; the market may again become lucrative for poppy-crop growers so we have to monitor the situation closely," said Yury Fedotov, Executive Director of UNODC.

In Afghanistan, the bulk of cultivation continued to take place in the restive southern and western provinces of the country.

"These regions are dominated by insurgency and organized crime networks. This underscores the link between opium poppy cultivation and insecurity in Afghanistan, a trend we have observed since 2007," said Mr. Fedotov.

Although cultivation remained stable at 123,000 hectares (ha), falling output was largely due to a plant disease hitting the major opium poppy growing provinces of Helmand and Kandahar particularly hard. As a result of the damage, yield fell 48 per cent to 29.2 kilograms per hectare, from 56.1 kilograms per hectare compared with the previous year.

Production down, prices up

Afghanistan, which has long produced about 90 per cent of the world's opium, had an estimated yield of 3,600 tonnes of opium this year. In the short run, the decline in opium production has pushed prices up. Now that opium is again commanding high prices, the gross income for farmers per hectare has increased by 36 per cent to US$ 4,900.

Shrinking supplies have driven the average farmgate price of dry opium to $169 a kilo, a 164 per cent increase over last year when the price was $64 a kilo.

"We will have to monitor price trends for several months to gain a true indication of how the opium market will be affected by the drop in production this year," said Mr. Fedotov.

Compounding the problem was the low price of wheat, an important alternative crop. "We are concerned that in combination with the high price of opium, a low wheat price may also drive farmers back to opium cultivation," said Mr. Fedotov.

The good news was that the 20 provinces that were opium poppy-free in 2009 remained poppy-free this year. And opium cultivation in Helmand province - the source of 53 per cent of Afghanistan's opium - was stable or declined slightly.

Mr. Fedotov called for a comprehensive strategy to rein in the Afghan opium threat, including by strengthening the rule of law and security, and spurring development efforts. "Corruption and drug trafficking feed upon each other and undermine any development effort in Afghanistan. We must continue to encourage the Afghan Government to crack down on corruption."

The first priority was to curb demand. "We must not forget the consumer side of opium's deadly equation. Unless we reduce the demand for opium and heroin, our interventions against supply will not be effective. As long as demand drives this market, there will always be another farmer to replace one we convince to stop cultivating, and another trafficker to replace one we catch."