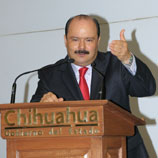 29 July 2011 - Violent attacks against journalists, as well as kidnappings and murders, are on the rise in Mexico. Since 2000, 71 journalists have been killed nationwide, according to the National Commission of Human Rights in Mexico. Many more have been victims of threats, assaults and intimidation, while others have been forced to flee the country. Such violence is directly linked to the battle among criminal groups for control over the main routes for the trafficking of illegal products and services, including drugs, and of migrants and trafficked persons. In addition, these groups use corrupt practices to influence media coverage.

UNODC has teamed up with media representatives, universities and federal and state-level governments in Mexico to hold media consultation workshops throughout 2011 in the nine states most affected by crime against the media: Chihuahua, Tamaulipas, Baja California, Sinaloa, Durango, Guerrero, Jalisco, Michoacan and Mexico City. The workshops will produce strategies at the state and federal levels which will enable the provision of technical assistance to media practitioners, authorities and leaders from the main sectors of society involved with protecting the rights to freedom of speech and of the press. Therefore, issues such as lawful conduct, crime prevention, security and justice will be addressed.

"Attacks against journalists by organized crime cartels have made it necessary for UNODC to respond," says Antonio Mazzitelli, UNODC Regional Representative for Mexico, Central America and the Caribbean. "Joining forces with the United Nations Educational, Scientific and Cultural Organization, the Office of the United Nations High Commissioner for Human Rights and government authorities, we seek to create a platform for dialogue and building capacity for an environment where journalists can work without fear. This project aims to bring journalists and Government authorities and society into a closer working relationship. In this way, they will understand each other's roles better and support each other to fight organized crime," he added.

During the training, participants will identify risks that the media face and propose solutions to help protect journalists. Participants will define the media's role in improving the rule of law. Specific tools for crime prevention and strengthening of the rule of law will be produced to foster better understanding by media practitioners of issues related to organized crime and drugs. The State of Chihuahua, which has one of the highest rates of violence against journalists, has provided journalists who will share their best practices during the workshops.

At the final forum, to be held at the end of 2011 in Mexico City, participants will draw up recommendations that will serve as guidelines for journalists. These recommendations will be presented to the state governments, the Secretary of the Interior and the advisory board of the Mechanism to Protect Journalists ( Mecanismo para Protección a Periodistas, an organization created by the Mexican government in 2010 to address violence against journalists).

The project, funded by the Government of Germany, was developed as part of the 2008-2011 country strategy for UNODC Mexico, Central America and the Caribbean in the area of prevention and criminal justice.

UNODC Office for Mexico, Central America and the Caribbean