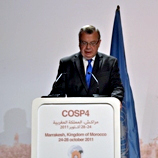 24 October 2011 - The millions of people involved in the Arab Spring have inspired the world and shown their hatred of corruption and corrupt societies, the head of UNODC, Yury Fedotov, said at the opening meeting of the fourth session of the Conference of the States Parties to the United Nations Convention against Corruption, which is being held in Marrakech, Morocco, from 24 to 28 October to review the implementation of the Convention and assess worldwide efforts to combat corruption.

The first meeting of the Conference was opened with the delivery of a royal message from King Mohammed VI of Morocco by the Royal Counsellor, Abdellatif Menouni. In his message, the King said that combating corruption and bribery were at the top of the list of citizens' pressing concerns: "These are serious scourges …. contrary to spiritual and civic values, but they also hamper development and are incompatible with democracy and good governance." The President of the Conference will be the Minister of Public Sector Modernization of Morocco, Mohamed Saad Alami.

Addressing the opening meeting of the Conference, Mr. Fedotov said that the Arab Spring's call for greater democracy was "an emphatic rejection of corruption and a cry for integrity" and that the international community must listen to the millions of people involved. "At the movement's centre was a deep-seated anger at the poverty and injustice suffered by entire societies due to systemic corruption," he said.

He added that the United Nations Convention against Corruption offered the strongest framework to address that global issue and had nearly reached universal ratification, having 155 States signatories.  He welcomed the thorough and enthusiastic way in which the States participating in the peer-review mechanism had embraced the exercise.

Turning to private sector corruption, Mr. Fedotov said that preventive action was needed by chief executive officers in their boardrooms as much as by police on the streets or civil servants in their departments: "All of us must contribute to a culture of integrity. The eyes previously closed to corruption must become the open eyes of justice and equality."

He praised the leadership shown by the 100 chief executives in the private sector who had called on Governments to establish a review mechanism for the Convention two years ago. He called on the business community to take steps to tackle corruption in their own midst by adopting policies in line with the Convention and to establish its own credible mechanism to assure anti-corruption performance.

Corruption was a serious impediment to reducing poverty and achieving the Millennium Development Goals, he warned. "Universal primary education cannot exist if bribes are needed to enter children into school systems … Reductions in child mortality are more difficult where payments are required to obtain medical assistance."  This could be the difference between eating or going hungry, and in some cases, he said, even between living and dying.

He spoke of the importance of recognizing the connections between corruption, transnational organized crime and drug trafficking.

Mr. Fedotov expressed appreciation for the high level of participation at the conference, which he said underlined the importance of the anti-corruption agenda among Member States. He reminded States of the need to build strong partnerships also with civil society, which had an important role to play in resisting corruption.

The Convention, which came into force in December 2005, is the only legally binding universal anti-corruption instrument. It obliges States to prevent and criminalize corruption, to promote international cooperation, to recover stolen assets and to improve technical assistance and information exchange in both the private and the public sectors.

The Conference will look at ways to improve international efforts to tackle corruption and strengthen integrity. The role young people can play in tackling corruption and the question of how to develop their knowledge of ethical standards will also be discussed.

The Conference of the States Parties is being attended by more than 1,000 delegates from 129 countries in addition to representatives of civil society, international organizations, parliaments, the media and the private sector. More than two dozen countries are represented by ministers.