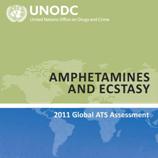 13 September 2011 - According to the latest report published by UNODC, amphetamine-type stimulants (ATS) such as "ecstasy" and methamphetamine now rank as the world's second most widely abused drug type after cannabis. The report - the 2011 Global ATS Assessment - notes that the expansion of illicit trade in such substances and the high profits generated by that trade pose an increasing threat to security and health worldwide.

Speaking at the release of the publication, UNODC Executive Director Yury Fedotov said: "The ATS market has evolved from a cottage-type industry typified by small-scale manufacturing operations to more of a cocaine or heroin-type market with a higher level of integration and organized crime groups involved throughout the production and supply chain. We are seeing manufacturing shifting to new markets and trafficking routes diversifying into areas previously unaffected by ATS."

The manufacturing and use of ATS is an issue which affects all regions of the world. In Europe, several countries have reported increases in the use and production of methamphetamine, while the discovery of clandestine laboratories in West Africa indicate that that subregion is also being drawn into the trade in ATS. Manufacture is also increasingly being reported by authorities in Central and South America, and in South-East Asia there has been an increase in the number of countries reporting the manufacturine of ATS. Interregional trafficking in ATS also appears to be increasing. For instance, in East and South-East Asia, the number of ATS laboratories shut down soared from 288 in 2008 to 458 in 2009, while the number of methamphetamine pills seized in South-East Asia leaped from 32 million in 2008 to 133 million in 2010.

Owing to their affordability and the relative ease with which they are manufactured, ATS are attractive drugs of choice for millions of drug abusers in all regions of the world. The drugs also offer criminals entry into unexploited and fresh markets, and unlike plant-based drugs, can be manufactured anywhere in the world with little initial investment required on the part of criminals.

The Assessment also addresses the rise of new stimulant drugs. In addition to amphetamines and Ecstasy, established ATS markets have also seen the emergence of so-called analogue substances which fall outside international control. Substances such as mephedrone or methylenedioxypyrovalerone (MDPV) are sold as "bath salts" or "plant food" and act as substitutes for illicit stimulant drugs such as cocaine. Such substances are sold over the Internet and some have been associated with fatalities.

Another emerging concern that the Assessment raises is the intravenous use of ATS. That trend, with its widespread health implications (particularly given its links to the spread of HIV), has been observed most frequently in East and South-East Asia and in parts of Western and Eastern Europe.