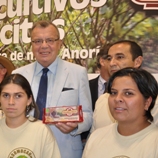 26 September 2011 - Some 80,000 farmers' families in Colombia depend on illicit coca bush cultivation to survive. UNODC runs projects to wean farmers off illicit crop cultivation by encouraging them to pursue alternative livelihoods, which is the best way to end the lure of illicit crops.

Today, Yury Fedotov, Executive Director of UNODC, visited Tarazá, in Antioquia Department, where many alternative development projects are under implementation. Accompanied by Ms. Catarina Martinez, High Representative of the Presidential Agency for Social Action, he saw how organic rubber and cocoa plantations have created jobs for hundreds of families. UNODC works closely with rural communities, including in Antioquia, where a project worth $8 million receives over 80 per cent of funds from the local government.

The Executive Director was delighted to be among the first to sample the new "Anorí" hot chocolate, which will be sold in Colombia's largest supermarket chain, "Éxito" (which is partly owned by the international supermarket chain "Casino").

The chocolate is produced by ASOMUCAN, a cooperative of 172 cocoa-growing families from Anorí that turn the raw material into finished products with the support of UNODC and the local government of Antioquia. With help to overcome their lack of marketing skills, several farmers' cooperatives have managed to enter into contracts with the company. Local and regional middlemen are also being cut out, which allows the farmers to reap greater profits.

Mr. Fedotov laid the first stone of the rubber quality-control laboratory and processing plant, which will benefit ASCULTICAUCHO, a cooperative of former coca bush growers living in one of the worst-affected drug production and trafficking zones of the recent past. The natural rubber will be fully processed, adding value to the investment. 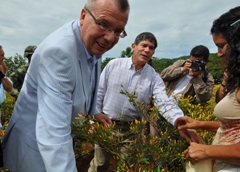 Yostor Clímaco, manager of ASCULTICAUCHO, told Mr. Fedotov that the rubber plantation was creating long-term employment. "Projects like these are the engine of the region's economy. Besides creating legitimate jobs, our families enjoy health care, education, credit loans and vocational training." said Mr. Clímaco. "We know that if we protect the environment and focus on high-quality products, we can contribute to the prosperity of our country."

"We have learned that lawfulness pays - but breaking the law causes a lot of problems", he added.

Colombia has by far the largest and most successful national alternative development programme in the world, with an annual budget close to $85 million. Programmes supported by UNODC have helped more than 150,000 farmers to switch from illicit markets to alternative livelihoods and have created more than 28,0000 jobs and 600 farm enterprises selling products worth $40 million (including coffee, cocoa, palm hearts, chocolate, honey and legal cash crops) through national and international supermarket chains.

"Many of the alternative development models developed in Colombia are worthy of replication in other countries," said Mr. Fedotov, congratulating the families involved. "I can only express my admiration for all of the local farmers who - with a lot of courage and conviction - have left behind the violence generated by coca bush cultivation to embrace a better future. We at UNODC are proud to be a part of this development."