"We must isolate piracy's ringleaders and financiers" 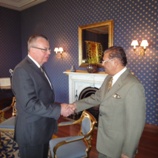 23 November 2012 - After visiting Seychelles, Kenya, and Somalia, the counter-piracy mission of UNODC Executive Director, Yury Fedotov, ended today in Mauritius. During the visit to East Africa, the UNODC Chief discussed counter-piracy efforts with heads of state and ministers, met with local counter-piracy and organized crime experts, and inspected prisons, and a training academy.

"If we are to counter piracy, we must break-up the criminal groups, identify and isolate the ringleaders and financiers, and disrupt their cash shipments through coordinated police and border work. UNODC's role is to support the criminal justice chain. We also recognize that there is no piracy without pirates. As a result, downstream, we need strong advocacy from community leaders and others in Somalia to prevent young men hijacking ships," said Mr. Fedotov at the close of the counter-piracy mission.

The ten-day mission was undertaken to gain personal insights into the complex nature of piracy and its impact on the countries of East Africa. His visit also looked at UNODC's response to the way piracy undermines local economies and sends illicit funds flowing into other crimes.

For the last four years, UNODC has operated a $55 million dollar Counter-Piracy Programme, in line with human rights standards, in East Africa. A programme that has sought region-wide cooperation in holding fair trials and providing safe, secure imprisonment of pirates, particularly in Somalia.

In Mauritius, Mr. Fedotov held talks with the President of Mauritius, Kailash Purryag. He thanked the President for his country's commitment to countering piracy and expressed the hope that piracy suspects would be prosecuted in Mauritian courts. Following his meeting with President Purryag, Mr. Fedotov met with Foreign Minister Arvin Boolell and stressed the importance of countries in the region sharing the burden of prosecuting and detaining convicted pirates.

UNODC has formed a strong partnership with the Government of Mauritius promoting learning exchanges among prosecutors, providing - in collaboration with INTERPOL - training in the analysis of intelligence arising from piracy cases in the country, as well as facilitating high level meetings between Mauritius and Puntland to discuss the Piracy Prisoner Transfer Programme.