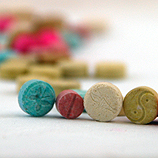 20 May 2014  - Synthetic drugs are taking an ever-greater share of the illicit drugs market, according to a new report by the United Nations Office on Drugs and Crime (UNODC).  New psychoactive substances (NPS) are also flooding a market for synthetic drugs long dominated by amphetamine-type stimulants (ATS), such as ecstasy and methamphetamine, which are more widely used than cocaine, opium or heroin.

"There is a dynamic and unprecedented global expansion of the synthetic drugs market both in scope and variety", said Jean-Luc Lemahieu, Director for Policy Analysis and Public Affairs at UNODC. "New substances are quickly created and marketed, challenging law enforcement efforts to keep up with the traffickers and curb public health risks."

Rates of methamphetamine seizures are higher than ever across the world, largely driven by the rise in seizures in East and South-East Asia as well as in North America, according to the 2014 Global Synthetic Drugs Assessment .  Methamphetamine, which can seriously harm users, continues to spread in Asia, posing a growing challenge to health care providers and drug control authorities dealing with large youthful populations. Methamphetamine supply grew rapidly in Asia, already the largest market for ATS, between 2008 and 2012 when methamphetamine seizures tripled to 36 tons.

New international supply channels are linking formerly regional ATS markets. Supply routes to Asia, the largest market for ATS and ecstasy worldwide, have emerged from West Africa and the Americas, supplementing methamphetamine manufacture in Asia. West Africa seems to be becoming a trans-shipment point for methamphetamine trafficked to East and South-East Asia via South Africa or Europe. Since 2009, about 86 per cent of ATS originating from West Africa seized at Western European and Japanese airports were destined mainly for Japan as well as Malaysia.  Turkey may also be emerging as a transit point for methamphetamine smuggled from Western Asia to East and South-East Asia.

The report confirmed signs of an expansion of the use and manufacture of ATS in Europe already observed in 2011.  Methamphetamine seems to be replacing amphetamine, particularly in Eastern Europe and the Baltics.  Amphetamine continues to be the main ATS used in the Middle East.

Ketamine, a veterinary anaesthetic, is more widely misused in East and South-East Asia. Mainland China and Hong Kong accounted for almost 60 per cent of global ketamine seizures between 2008 and 2011.

Marketed - often wrongly - as 'legal highs' and 'designer drugs', NPS are proliferating but in the absence of an international framework, responses to the problem vary significantly from country to country. None of the 348 NPS reported globally in over 90 countries at the end of 2013 is currently under international control. However, in 2014, the United Kingdom requested the international control of mephedrone, a potentially fatal substance, under the 1971 UN Convention on Psychotropic Substances. The use of synthetic cannabinoids, which mimic the effects of cannabis, is soaring; the total number of these substances almost doubled from 60 in mid-2012 to 110 by 2013.

Synthetic drugs have gained in popularity among the young. In parts of South and Central America, ATS use in younger age groups sometimes even exceeds that of cannabis and/or cocaine. In North America and Europe, certain NPS are more widely used by young consumers than traditional illicit drugs.

A particularly worrying development is that NPS are no longer restricted to niche markets. Evidence from almost all regions of the world indicates that tablets sold as ecstasy or methamphetamine contain substances other than the touted active ingredients - increasingly, they comprise chemical cocktails that pose unforeseen public health challenges. Emergency services may therefore find themselves unable to identify life-threatening substances and powerless to administer the proper medical treatment.

Khat, a plant-based NPS until recently confined to traditional use in East Africa and parts of the Arabian peninsula, is increasingly being trafficked from East African countries, such as Ethiopia and Kenya, to European destinations, such as the UK and the Netherlands, and even as far afield as North America.  Saudi Arabia has reported by far the largest khat seizures in the Middle East.  Lately, khat has also been seized in East and South-East Asia, as cultivation of the plant has extended to that region.