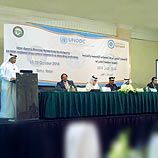 14 October 2014 - The second inter-regional meeting of criminal intelligence experts and investigators under UNODC's 'Networking the Networks' initiative opened today in Doha, Qatar. Co-hosted by the Gulf Cooperation Council's Criminal Intelligence Centre to Combat Drugs, the meeting will look at specific organized crime cases that transcend regional boundaries. The aim is to learn from those experiences and identify areas for cooperation in joint or parallel investigations to dismantle organized crime groups involved in drug trafficking and related crime.

The Networking the Networks initiative aims to establish a criminal intelligence network in an innovative approach to confronting illicit drugs and crime across regions. It links national, regional and inter-regional law enforcement bodies to create better coordination, share information and better assist in tracking criminal proceeds. Such measures will help increase prosecutions against transnational organized crime.

During the Doha meeting, experts from Central and Southeast Asia, Eastern Africa, Europe, as well as countries of the UNODC-brokered Triangular Initiative (Afghanistan, Iran, Pakistan) joined with counterparts from the Gulf States and international agencies such as INTERPOL and the World Customs Organization.

The meeting follows an agreement by 16 international and regional agencies and organizations brought together by UNODC in Istanbul in December 2013 to extend cooperation in and remove barriers to dealing with serious crime such as drug trafficking.

The initiative also forms part of an overall inter-regional drug control approach, which was developed to address the challenges stemming from the illicit opiate trade from Afghanistan, and is based on shared responsibility outlined under the Paris Pact Initiative - a broad international coalition of over 70 countries.