New trends and regional differences in the manufacturing of methamphetamine 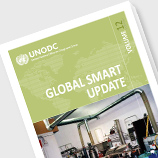 15 September 2014 - The illicit manufacture of methamphetamine has traditionally been concentrated in North America (primarily in Mexico and the United States) and East and South-East Asia (China, Indonesia, Malaysia and Thailand), close to the major consumer markets. The latest UNODC's Global SMART Update study, however, shows that it has recently spread to other countries such as Guatemala, the Islamic Republic of Iran, Kenya, Nigeria and South Africa.

The Update also reveals that some countries in Africa and the Middle East have recently emerged as important regions for methamphetamine supply, and that methamphetamine manufacture is also spreading across Europe, though at low levels.

Manufacturing methods vary throughout the world, although most regions continue to rely on the use of ephedrine and pseudoephedrine as precursors to manufacture methamphetamine. An exception is North America, where methods based on P-2-P - a precursor also known as 1-phenyl-2-propanone or benzyl methyl ketone (BMK) - are mainly in use.

The threat of synthetic drugs- such as methamphetamine, amphetamine and ecstasy-type substances and new psychoactive substances (NPS) - is a significant drug problem worldwide. After cannabis, amphetamine-type stimulants are the second most widely used drugs in the world, exceeding the use of cocaine and heroin.

As a response to the synthetic drug challenge, UNODC launched in 2008 the Global SMART (Synthetics Monitoring: Analyses, Reporting and Trends) Programme. The Programme improves the capacity of Member States to generate and manage information on illicit synthetic drugs, including its reporting, and it operates in East and South-east Asia, and more recently Latin America.