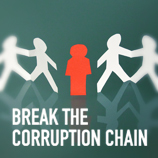 1 December 2015 - Leading up to the International Anti-Corruption Day on 9 December, UNODC and the United Nations Development Programme (UNDP) have launched a campaign to raise awareness about corruption, which calls for people from all walks of life to take action against this crime. The slogan 'Break the corruption chain' encourages Governments, the private sector and the general public to tackle this issue by changing their attitudes.

The campaign also highlights that corruption is a cross-cutting crime, impacting many areas. It shows that acting against corruption is imperative to achieving the Sustainable Development Goals, which aim to end poverty, protect the planet, and ensure prosperity for all.

A wide-ranging social media campaign is being rolled out starting this week. Materials including messages, images, logos and posters are available at the International Anti-Corruption Day microsite. Use the official hashtag #breakthechain to engage in the campaign and follow the conversation.