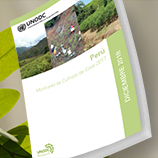 21 December 2018 - The coca cultivation area in Peru increased by 14 per cent, or by 6,000 hectares between 2016 and 2017, reaching a total of 49,900 hectares according to the Coca Survey Peru 2017 released today by the United Nations Office on Drugs and Crime (UNODC) and the National Commission for Development and Life without Drugs (DEVIDA).

Around 75 per cent of coca cultivation was detected in three zones: VRAEM (Ayacucho, Cusco and Junin), Convention y Lares (Cusco) and Inambari-Tambopata (Puno). In these zones, the surface used to grow coca leaf crops reached a total of 37,429 hectares, equivalent to an increase of 35 per cent, or 2,648 hectares, compared to 2016.

Kristian Hölge, Representative of UNODC for Peru and Ecuador, emphasized the timeliness of the new VRAEM 2021 Strategy: "The coca-growing communities in the valley need sustainable solutions. The figures in today's report must be complemented by further socio-economic and environmental data which are analysed in a way that supports the territory's shift towards legality."

The Report highlights that the surface used for illegal coca growing in Protected Areas (PA) grew by 36 per cent, from 168 to 228 hectares. Likewise, these crops affected 6,466 hecatres of the buffer zones surrounding the PA, an increase of 15 per cent from 2016.

In Native Communities, 3,366 hectares of coca were detected, which is 22 per cent more than in 2016. Of this amount, 1,382 hecatres are in the VRAEM zone. The communities of Shimpenchariato and Greater Shinongari were the most affected native communities, with 702 and 279 hectares respectively.

The estimate of the potential production of coca leaf was 117,292 tones, which is 11 per cent more than in 2016. The great majority of this amount, 106,401 tons, was destined for drug trafficking, while around 67 per cent of the total amount was produced in the VRAEM zone.

The Report remarks that the Special Project for Control and Reduction of Illegal Crops in the Alto Huallaga (CORAH) eradicated 25,784 hectares, reaching its annual goal. According to estimates by the National Anti-Drug Directorate of the National Police (DIRANDRO), this prevented the production of 241 tons of cocaine.

The Coca Survey Peru 2017 is the result of a joint cooperation between DEVIDA, CORAH and UNODC. As members of the Technical Monitoring Committee, they have directly taken part in the implementation of the activities, with the technical and methodological support of the UNODC Illicit Crop Monitoring Programme in Vienna.