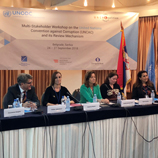 The event aims to facilitate collaboration between the various stakeholders in implementing UNCAC and its Review Mechanism, and to advise them on applying the methodology and tools available through the Convention. Among other things, this will enable them to build on the momentum of their country reviews and ensure that preventing and eradicating corruption is at the forefront of their national agendas.

The event is a good opportunity for the 60 participants to engage in a constructive dialogue on good practices and lessons learned, thereby building trust and confidence among each other.

Representing the host country, Katarina Nikolic of the Serbian Ministry of Justice stressed that prevention is better than cure, highlighting the decisive commitment from the Serbian authorities to eradicate corruption from its roots, which falls in line with Chapter II (Preventative Measures) of the Convention being reviewed under the current cycle.

Karla Hershey, United Nations Resident Coordinator in Serbia, emphasized that in order to succeed collectively, civil society organizations (CSOs) and the private sector must be involved in the State's effort to combat corruption.

Zsuzsanna Hargitai, Director and Regional Head of Western Balkans for the European Bank for Reconstruction and Development (EBRD), echoed Ms. Hershey's remarks. She highlighted the importance of coordinating efforts between the private sector and civil society, stating that since 2014, "EBRD has been committed to strengthening public-private sector dialogue, promoting good governance, and enhancing transparency in the Balkans."

The workshop was organized by UNODC in partnership with the UNCAC Coalition with the support of the European Bank for Reconstruction and Development (EBRD) and the Regional Anti-Corruption Initiative (RAI), through the Austrian Development Agency (ADA).

UNODC Activities with Civil Society in the fight against corruption