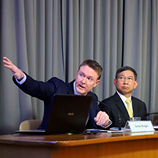 Bangkok (Thailand), 18 July 2019 - Profits generated by organized crime groups in Southeast Asia have reached unprecedented and even dangerous levels according to a new report released today by the United Nations Office on Drugs and Crime (UNODC).