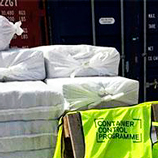 17 July 2019 - Every year, more than 750 million container movements take place around the globe by sea, transporting 90 per cent of the world's cargo. Most containers carry legal merchandise, but some are being used to smuggle drugs, weapons, and other illicit goods.

This month the Container Control Programme (CCP), a joint initiative by the United Nations Office on Drugs and Crime (UNODC) and the World Customs Organization (WCO), exceeded the threshold of 300 metric tons of cocaine seized since the launch of the programme in 2004. The Port Control Unit (PCU) in Santos, Brazil, made the seizure to surpass this impressive amount by detecting 523kg of cocaine in a frozen orange juice shipment headed to Europe. In 2019 alone, PCUs worldwide have made significant cocaine seizures totalling more than 30 tons so far.

Amid threats posed by transnational organized crime, the Container Control Programme seeks to improve the capacity of customs and other law enforcement officials to detect and disrupt the flow of illicitly trafficked goods, while facilitating legitimate trade and raising state revenues.

The practical exercises during the globally standardized CCP trainings help officers to identify and inspect high risk containers. Counterparts see this success connected to the support and training received from CCP.

UNODC's Director of the Division for Treaty Affairs, John Brandolino, highlighted that "This milestone of the UNODC-WCO Container Control Programme demonstrates how the program plays its part in helping secure the containerized trade supply chain, which is critical to many economies."

Speaking about the results, Tofik Murshudlu, UNODC's Chief of the Implementation Support Section, said: "This achievement is an example of the effectiveness and result-orientation of the programme. CCP helps Member States build capacities and expertise to identify and seize suspicious container shipments of drugs and other illicit goods, such as firearms, precursors, falsified medicines, wildlife species, counterfeit goods and many others."

WCO's Director for Compliance and Facilitation, Ana Hinojosa, attributed the success of the CCP to its structured and operationally geared training concept, addressing the day-to-day targets of Customs and other law enforcement authorities in fighting illicit trade whilst maintaining the delicate balance with trade facilitation.

CCP celebrates its 15 th anniversary this year. The programme offers capacity building trainings in countries seeking to improve risk management, supply chain security and trade facilitation in sea, land and airports in order to prevent the cross-border movement of illicit goods. This includes assistance through advanced specialized training, regular follow-ups and onsite visits combined with mentoring of PCUs. Further, steering committee meetings and discussions with key stakeholders are held on a regular basis.

CCP's efforts have resulted in seizures of a wide range of prohibited goods, such as weapons, shipments of fisheries, forest, wildlife and other environmental crime, prohibited drugs, strategic goods, falsified or unlicensed medicines, precursors for drugs and weapons, cigarettes and goods which are counterfeit or otherwise violate intellectual property law.

At present, CCP is operational in 51 countries and has initiated activities in ten more. More than 90 Port Control Units (PCUs) and Air Cargo Control Units (ACCUs) have been established since the programme's inception in 2004.

Some major cocaine seizures since CCP's inception include: