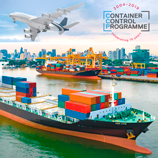 Antwerp (Belgium), 8 October 2019 - The Container Control Programme (CCP), which counters the cross-border movement of illicit goods and is jointly implemented by the United Nations Office on Drugs and Crime (UNODC) and the World Customs Organization (WCO), today celebrates its 15 th anniversary.

Every year, more than 750 million twenty-foot equivalent units (TEU) are recorded in the global containerized trade supply chain, accounting for around 90 per cent of the world's cargo. The vast majority of containers carry licit goods; however, some are used to smuggle drugs, weapons, and other illicit goods.

As a response, the CCP assists governments in building the capacities of national agencies at the border to detect illicit goods in sea, land and air cargo consignments. It thereby helps to strengthen international supply chain security and contributes to facilitate legitimate trade.

Since its inception in 2004, CCP units across the globe have seized a wide range of prohibited goods, including over 300 metric tons of cocaine, over 71 metric tons of cannabis, around 6,500kg of heroin, over 1600kg of psychotropic and new psychotropic substances, and over 1720 metric tons of precursors for drugs and explosives. These units also seized over 170 shipments relating to fisheries, forest, wildlife and other environmental crime and more than 100 strategic trade and dual-use shipments.

Speaking about the Programme's achievements, Jean-Luc Lemahieu, Director of UNODC's Division for Policy Analysis and Public Affairs, said: "The CCP's capacity to adapt to emerging security challenges is a key reason for its continuous success and relevance fifteen years after its creation."

Ana Hinojosa, WCO's Director of Compliance and Facilitation, attributes the success of the CCP to "its comprehensive and staged training concept which builds expertise over a longer period of time from basic knowledge to advanced and complex subjects such as dual-use technology and protection of endangered species"

Expanding the network against illicit trafficking

What began as a modest project, established in four seaports and primarily focused on drug trafficking, became a far-reaching programme on a global scale. As of today, the CCP has established more than 100 operational inter-agency Units in over 50 countries and has expanded its focus to include airports, dry ports, land border crossings and rail terminals.

Responding to constantly evolving crime threats, the Programme has expanded into new thematic areas, including environmental crime, trafficking in cultural property, dual use and strategic goods, CBRNe [1] materials, weapons and their means of delivery, firearms and more advanced weapon systems, chemical precursors to drugs and explosives, as well as the exploitation of the air cargo supply chain. In addition, it supports fair revenue collection by the detection of a large number of non- or falsely declared commercial goods, such as cigarettes.

Working with Customs and other law enforcement authorities, the Programme ensures implementation of UN instruments, including UN Security Council resolutions, at the frontline level.

In addition, the CCP has been continuously promoting gender equality in all its activities. In 2015, the CCP Women's Network initiative was launched to promote women's roles in the Programme and foster an inclusive dialogue. As a result, women's participation in CCP units has grown steadily, and today they represent 16 per cent of the total number of officers. The recently announced campaign 'CCP Champions for Change' is one example of the continuous commitment of the Programme to advancing gender equality.

The donors of the Programme are Australia, Canada, Denmark, the European Union, France, Germany, Italy, Japan, Luxembourg, the Netherlands, Norway, Spain, Sweden, DCAF/Switzerland, the United Kingdom and the United States of America.