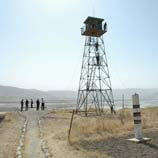 3 June 2009 - With its 1,344 km-long border with Afghanistan, Tajikistan is confronted with a serious trafficking problem - the worst in Central Asia. Nearly 20 per cent of the opiates leaving Afghanistan transit through Central Asia, and much of that flows through Tajikistan. Tajikistan's Drug Control Agency (DCA), which celebrates its tenth anniversary this week, has been instrumental in stemming the flow of opiates along the "northern route" from Afghanistan via Central Asia and the Russian Federation to Europe. The DCA was created in 1999 with the assistance of UNODC.

Tajikistan accounted for most of the seizures of opiates in Central Asia in 2008. UNODC Regional Representative James Callahan, while attending the anniversary celebrations in Dushanbe, noted that "during the past 10 years the DCA has continually strengthened its coordination role and increased its operational capacity. The DCA analytical centre is now a regional model for building intelligence capacity with a professional level equivalent to many of its counterparts in Europe."

The Tajik DCA is increasingly conducting intelligence-led operations to counter the trade in both opium and the chemicals needed to produce heroin. This supports the Central Asian Regional Information Coordination Centre (CARICC) , also led by UNODC, which kicked off its pilot phase in November 2008 in Almaty, Kazakhstan, and became an official regional body on 22 March 2009. The Centre is also establishing links with Europol, INTERPOL and other regional bodies.

UNODC and international partners are working to equip guard posts along the Tajik-Afghan border and train border control officers.  UNODC has worked on enhanced intelligence collection and analysis with mobile units complementing border liaison offices established at checkpoints. The first such offices are slated for the Afghan-Turkmen border; border liaison offices will then be established in Tajikistan and Uzbekistan.

UNODC will continue to work to strengthen the capacity of the DCA to carry out counter-narcotics operations, collect and analyse data (including forensic data) and improve coordination and cooperation with other relevant national, regional and international law enforcement bodies.