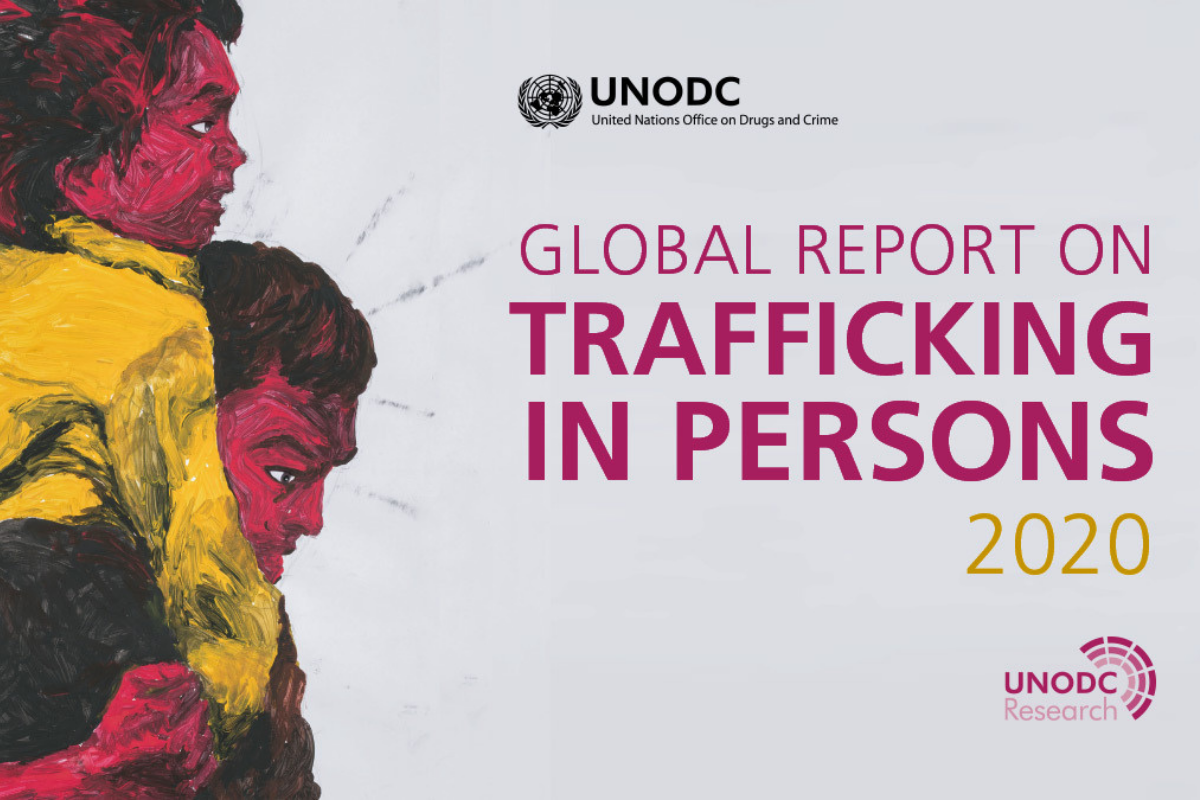 Vienna (Austria), 2 February 2021 — The share of children among detected trafficking victims has tripled while the share of boys has increased five times in the past 15 years. Girls are mainly trafficked for sexual exploitation, while boys are used for forced labour, according to the Global Report on Trafficking in Persons, launched by the United Nations Office on Drugs and Crime (UNODC) today.

In 2018 about 50,000 human trafficking victims were detected and reported by 148 countries. However, given the hidden nature of this crime, the actual number of victims trafficked is far higher. The Report shows traffickers particularly target the most vulnerable, such as migrants and people without jobs. The COVID-19-induced recession is likely to expose more people to the risk of trafficking.

“Millions of women, children and men worldwide are out of work, out of school and without social support in the continuing COVID-19 crisis, leaving them at greater risk of human trafficking. We need targeted action to stop criminal traffickers from taking advantage of the pandemic to exploit the vulnerable,” said UNODC Executive Director Ghada Waly.

“The UNODC Global Report on Trafficking in Persons 2020, coupled with the technical assistance UNODC provides through its global programmes and field network, aims to inform governments’ anti-trafficking responses, end impunity, and support victims as part of integrated efforts to build forward from the pandemic.”

Profile of the Victims

Female victims continue to be the primary targets for trafficking in persons. For every 10 victims detected globally in 2018, about five were adult women and two were young girls. Around 20 per cent of human trafficking victims were adult men and 15 per cent were young boys.

Overall, 50 per cent of detected victims were trafficked for sexual exploitation, 38 per cent were exploited for forced labour, six per cent were subjected to forced criminal activity, while one per cent were coerced into begging and smaller numbers into forced marriages, organ removal, and other purposes.

The share of detected victims trafficked for forced labour has steadily increased for more than a decade. Victims are exploited across a wide range of economic sectors, particularly in those where work is undertaken in isolated circumstances including agriculture, construction, fishing, mining, and domestic work.

Profile of the Offenders

Globally, most persons prosecuted and convicted of trafficking in persons continue to be male, with around 64 and 62 per cent respectively. Offenders can be members of organized crime groups, which traffic the great majority of victims, to individuals operating on their own or in small groups on an opportunistic basis.

Traffickers see their victims as commodities without regard for human dignity and rights. They sell fellow human beings for a price that can range from tens of US dollars to tens of thousands, with large criminal organizations making the highest incomes.

Traffickers have integrated technology into their business model at every stage of the process, from recruiting to exploiting victims. Many children are approached by traffickers on social media and they are an easy target in their search for acceptance, attention, or friendship. UNODC has identified two types of strategies: “hunting” involving a trafficker actively pursuing a victim, typically on social media; and “fishing”, when perpetrators post job advertisements and wait for potential victims to respond. The internet allows traffickers to live stream the exploitation of their victims, which enables the simultaneous abuse of one victim by many consumers around the globe.

Based on the data collected from 148 countries, UNODC was able to record 534 different trafficking flows around the globe although victims are typically trafficked within geographically close areas. A typical example involves girls recruited in a suburban area and exploited in nearby motels or bars. Globally, most victims are rescued in their own country of origin. For more details, please consult the attached table on regional trends, or the Report.

The Global Report on Trafficking in Persons is produced by UNODC every two years, to inform an effective response to this crime and place it within the context of the UN Sustainable Development Agenda. The 2020 edition covers data from the world’s largest database on trafficking victims, compiling figures from official sources across 148 countries. It also analyses 489 court cases from 71 different countries, providing more qualitative information on the perpetrators and the characteristics of this crime.