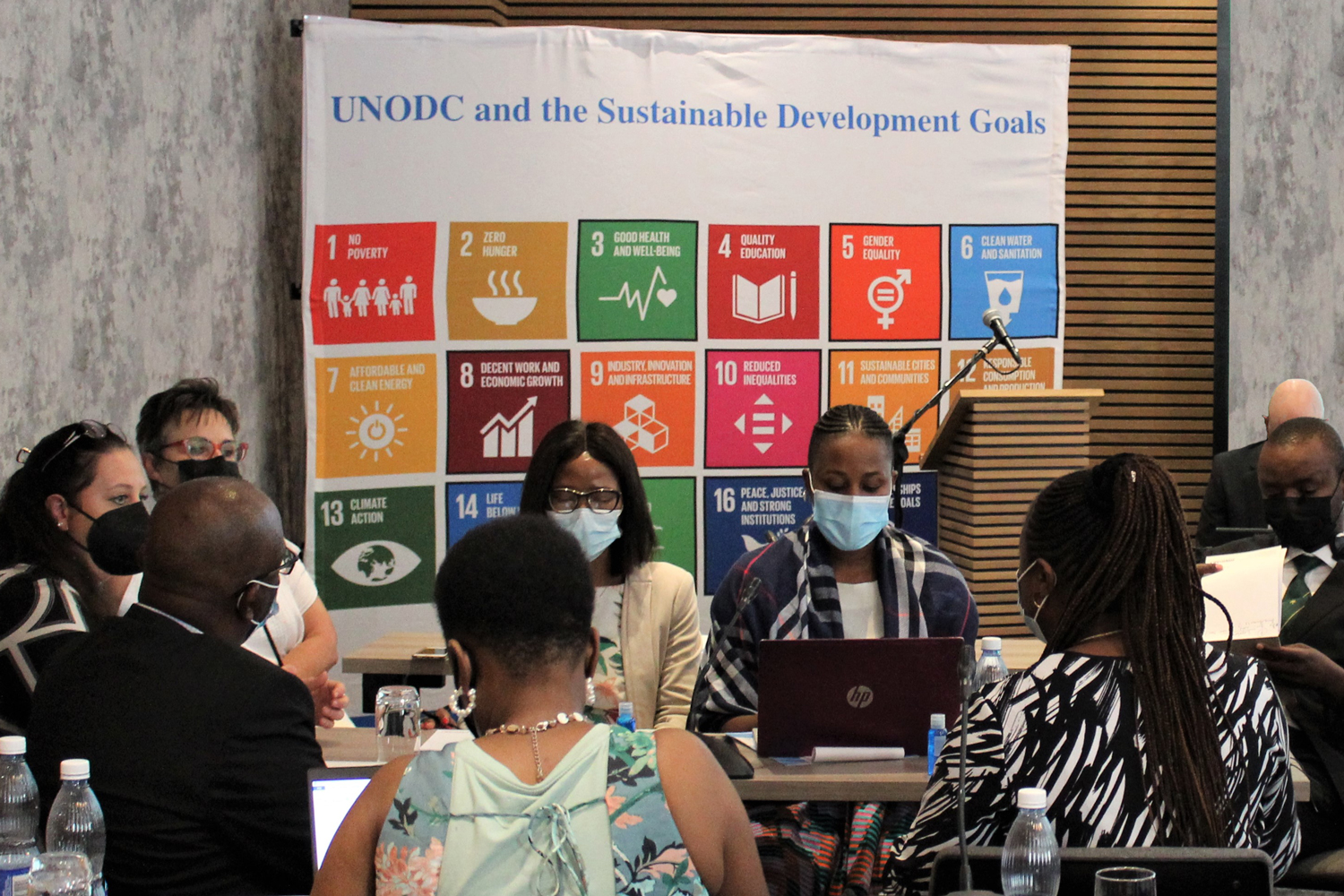 11 February 2022 – From bribery and trading in influence to abuse of functions and embezzlement, corruption takes many different forms. While an age-old issue, it is the ever-increasing complexity of the crime, coupled with the impact seen during times of crisis such as during COVID-19, which makes it even more concerning.

Against this background, members and high-level officials of national anti-corruption commissions, treasuries, ministries of justice, public procurement authorities, and civil society organizations from the eight countries of the regional platform created by UNODC in Southern Africa to fast-track implementation of the UN Convention against Corruption (UNCAC) gathered this week in South Africa as part of UNODC’s ongoing assistance efforts in the region. The event represented a unique opportunity for countries to share progress, exchange good practices, and address common challenges, as well as discuss the way forward and the future anti-corruption work to be undertaken within the regional platform.

“This regional event is being organized as we prepare to celebrate one year since the adoption of the UNODC Strategic Vision for Africa 2030 that set out safeguarding people and institutions from corruption and economic crime as one of the Vision’s five goals,” noted Brigitte Strobel-Shaw, Chief of UNODC’s Corruption and Economic Crime Branch. “As part of this, UNODC is committed to supporting Africa to realize the 2030 Agenda for Sustainable Development and the continent’s own Agenda 2063: the Africa We Want.”

Reflecting the importance of this work within the anti-corruption area, the meeting was joined by several high-level participants, including the Angolan and Zambian Ministers of Justice; the South African Deputy Minister of Public Service and Administration; the Mozambican Vice-Attorney-General; and the Chairperson of the Zimbabwe Anti-Corruption Commission. The civil society voice was also strongly represented, with 18 organizations from all eight of the participating countries present. In total, some 60 people took part, ensuring a diverse and dynamic discussion around the common threat of corruption.

“Regional approaches against corruption are important,” noted Mulambo Haimbe, Zambia’s Minister of Justice at the start of the week’s gathering. “They enhance efficiency and effectiveness in preventing, detecting and prosecuting corruption through skills exchange, collaboration, cooperation and information-sharing.” This significance of partnerships in tackling corruption was echoed by the Angolan Minister of Justice, Francisco Manuel Queiroz: “We know that our challenge is enormous. But we also know that we can count on the collaboration and participation of all countries in our region. We are together with you in this fight.”

It was precisely these factors which had led UNODC to establish a group of regional platforms across the world over the past few years, including in Southern Africa in 2019. Designed to facilitate the implementation of UNCAC into domestic legislation – and with a methodology and approach recognized by States parties through the adoption of a specific resolution at the recent CoSP9 – the regional platforms assist in fast-tracking the process by leveraging regional capacities and knowledge to identify achievable and practical reform priorities. It is, as flagged by Minister Haimbe, “initiatives such as this, where we share regional and international best practice against corruption, that ultimately lead to our collective victory.”

Identified as regional priorities by the participating countries of Angola, Botswana, Malawi, Mozambique, Namibia, South Africa, Zambia and Zimbabwe, the platform looks at four key focus areas. This week’s workshop was structured around enhancing responses to two of these – whistle-blower protection and public procurement – as well as addressing the overarching element of COVID-19 response and recovery. Importantly, it also assisted in informing the next stages of UNODC’s anti-corruption work with countries in the region, ensuring the collaborative approach continues.

“This workshop allows us to take stock of the progress achieved since the creation of the regional platform and to discuss our next steps in continuing to strengthen whistle-blower protection in Southern Africa,” noted Ms. Strobel-Shaw. “It represents a unique opportunity for us to discuss the future of the regional platform and to reaffirm our commitment to collaborating together.”

Over the past two years, the regional platform has led to a number of tangible results. As elaborated by Marco Teixeira, UNODC Southern Africa’s Officer-in-Charge, it has “enhanced the strategic role of UNODC in the region as a provider of technical assistance in the area of anti-corruption…which resulted in a number of interventions under the four thematic areas of the regional platform.” In Botswana, for instance, UNODC has been supporting the country to review its existing whistle-blower protection legislation; meanwhile, in South Africa, a procurement corruption risk assessment at the National Department of Health is underway and a safer reporting channel at the Health Professions Council of South Africa is being piloted; elsewhere, in Zambia, the organization is supporting the establishment of a national taskforce for improved inter-agency coordination in the investigation and prosecution of anti-corruption and money-laundering cases; and in Zimbabwe, new legislation on whistle-blower protection is being developed with the support of UNODC.

Several sessions were held during the workshop covering a number of innovative angles related to whistle-blower protection and public procurement, such as addressing the gender dimensions of corruption; technical tools and knowledge developed by UNODC; taking stock of the progress made and challenges faced at national and regional levels; and panel discussions that shared good practices that promoted common learning. A session on external reporting and capitalizing on the role of civil society in managing and receiving whistle-blower reports was also held. During the session, civil society organizations (CSOs) Transparency International Zambia, South Africa-based Ethics Institute, and Anti-Corruption Trust Southern Africa from Zimbabwe presented tangible impacts of civil society in filling enforcement gaps in whistle-blower protection. Additionally, there was consensus on the complementary role of civil society to ensure fair and effective public procurement processes, showcased in a presentation from CSO Open Contracting and Multi-Stakeholder Group, Malawi. In the months prior to the workshop, the CSOs took part in a civil society assessment recording examples of good practices in the priority areas as well as recommendations for continuing the partnerships built through the regional platform.

UNODC’s anti-corruption work in areas such as fast-tracking UNCAC is funded thanks to support from the United Kingdom and the United States. Working with the US Bureau of International Narcotics and Law Enforcement Affairs, UNODC is bringing together national public procurement bodies, supreme audit institutions and anti-corruption authorities to strengthen public procurement transparency and whistle-blower protection as an integral part of COVID-19 recovery efforts. The project covers nine countries worldwide, including South Africa, where technology is being leveraged to bolster anti-corruption innovation, bringing in the use of open data and data analytics to inform and advance efforts to prevent and counter corruption. “As champions of innovative initiatives such as Open Government Partnership, we applaud the efforts of civil society,” commented the Acting US Consul General in Cape Town, C.G Will Stevens. “Cape Town’s very own GOVCHAT is designed to create an effective tool to promote government transparency and accountability.”

Meanwhile, with the support of the United Kingdom, the implementation phase of the UNCAC fast-tracking project in Southern Africa has been ongoing since June 2020. Since its inception, a number of activities have been conducted on all four regional priorities. For instance, national level workshops on whistle-blower protection took place in Botswana, South Africa, Zambia, and Zimbabwe, along with various other priority areas such as inter-agency coordination, asset disclosure and public procurement. These workshops enabled progress and concrete action in participating countries on the priority areas through the drafting and adoption of relevant legislation, policy, and procedural frameworks, among others.

It was Zambian Minister Haimbe’s comments that set the scene for future collaboration, highlighting the importance of tackling corruption and the role that regional platforms can have: “As we consider transforming societies through anti-corruption innovation in public procurement and whistle-blower protection, more work lies ahead. We must remain steadfast and ramp up our efforts against corruption.”

Fast-Tracking the Implementation of UNCAC