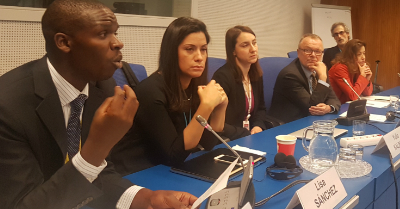 14 March 2018 - On the margins of the 61 st session of the Commission on Narcotic Drugs, the Vienna NGO Committee on Drugs and UNODC Civil Society Team organized a side event to present the role of civil society in the implementation of the UNGASS 2016 outcomes.

The Team Leader of the UNODC Civil Society Team gave a historical timeline of the milestones achieved during the cooperation between UNODC and NGOs which stretches from the "Beyond 2008" project that provided forward-looking recommendations to UNODC and the Commission. Ms. Mirella Dummar Frahi highlighted the importance played by the CSTF in the preparation for and during the UNGASS 2016, as well as its crucial role in coordinating NGO contribution to the 2019 Ministerial segment.

Sharing experience from Mexico, Ms. Lisa Sanchez representing the NGO Mexico United against Crime gave detailed account on the good practices her country, when it comes to CSOs involvement in drug policy. Through liaisons with CSOs within the Ministries, the incorporation of CSO members in Mexican delegations that helps to inform on ongoing negotiations on drug issues, and meetings and dialogues between NGOs and officials, including different countries, to learn about good practices and produce documents that detail actions required by Mexican Agencies.

Mr. George Ochieng Odalo spoke on behalf of the NGO Slum Child Foundation and reminded that drug use is a direct obstacle to the realisation of SDGs, and it calls for international cooperation. Mr. Ochieng Odalo insisted on the importance of working together, between CSOs and governments, and at the international level, in order to create a bond between policy makers and those who implement interventions on the ground. His organisation provides information about policy and their effects; in schools, in slums, or through conferences with other NGOs in the region. "For organisations that lack the resources, the NGO Market place is a substantial improvement", concluded Mr. Ochieng Odalo.

Finally, a presentation of the new version of the NGO Marketplace was given by Mr. Peter Calvache, the CEO of Progressive Mindworks, the company that was contracted to design the platform. Mr. Calvache gave alive demonstration of the new functions of the platform which was reinvented to better suit the needs of its users, including simplified registration, easy activity reporting, and intuitive communication. These features will be invaluable in supporting NGOs in the implementation of UNGASS 2016 outcomes.

UNODC works with thousands of civil society organizations at local, national, regional and global levels. The side event was implemented within the framework of the MoU between UNODC and VNGOC which was signed in January 2017. Over 352 representatives from 90 NGOs attended the  61 st session of the CND.