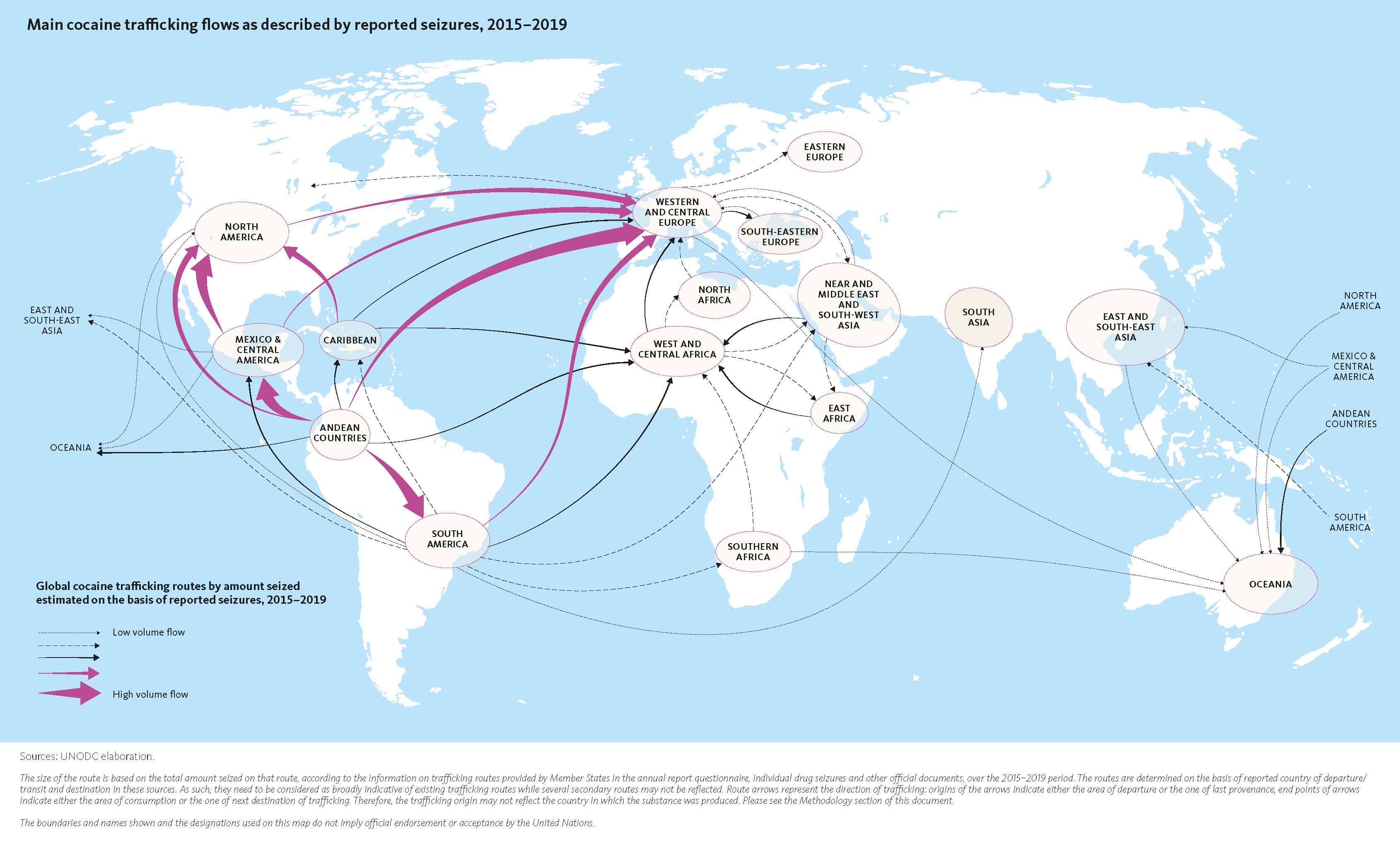 The cocaine market presents a clear threat at global level. The current situation is marked by well-defined locations of production (in the Andean-Amazonian region of South America) as well as consumption, with close to four fifths of users to be found in the Americas and Europe. This in turn leads to trafficking routes from a circumscribed origin to specific, even if far-flung, destinations, while some parts of the world play a crucial role as transit regions.

The routes, modalities and networks employed by criminal actors however continue to evolve, diversify and become more efficient. Moreover, the current relative concentration of consumers presents a clear potential for expansion, and new markets threaten to emerge. The increasingly globalized, interconnected, digitalized and technologically sophisticated nature of society, as well as a growing affluent demographic in some regions where cocaine use has traditionally been low, can potentially catalyse and accelerate this expansion.

The UNODC cocaine research programme recognizes these realities and aims to read the trends with a view to painting a picture of potential future developments, identifying emerging threats and ultimately enabling a pre-emptive response implemented with foresight.

Cocaine Insights – issue 1: The illicit cocaine trade from Latin America to Europe – from oligopolies to free-for-all?

Cocaine Insights – issue 4: Brazil in the regional and transatlantic cocaine supply chain: The impact of COVID-19

Work on the first Global Report on Cocaine Markets is currently underway.

Drug Trafficking through Gender Lenses: Women’s involvement and impact on their lives – side event at the 65th session of the Commission on Narcotic Drugs, 14 March 2022.

The Changing Face of the Global Cocaine Market: Reading the Trends to Respond with Foresight – side event at the 64th session of the Commission on Narcotic Drugs, 14 April 2021

Shared Responsibility in Addressing the Cocaine Threat along the Supply Chain – side event at the 63rd session of the Commission on Narcotic Drugs, 4 March 2020

Parts of the research work on the cocaine market are conducted in collaboration with the UNODC Drugs Monitoring Platform and in the framework of the CRIMJUST Global Programme.