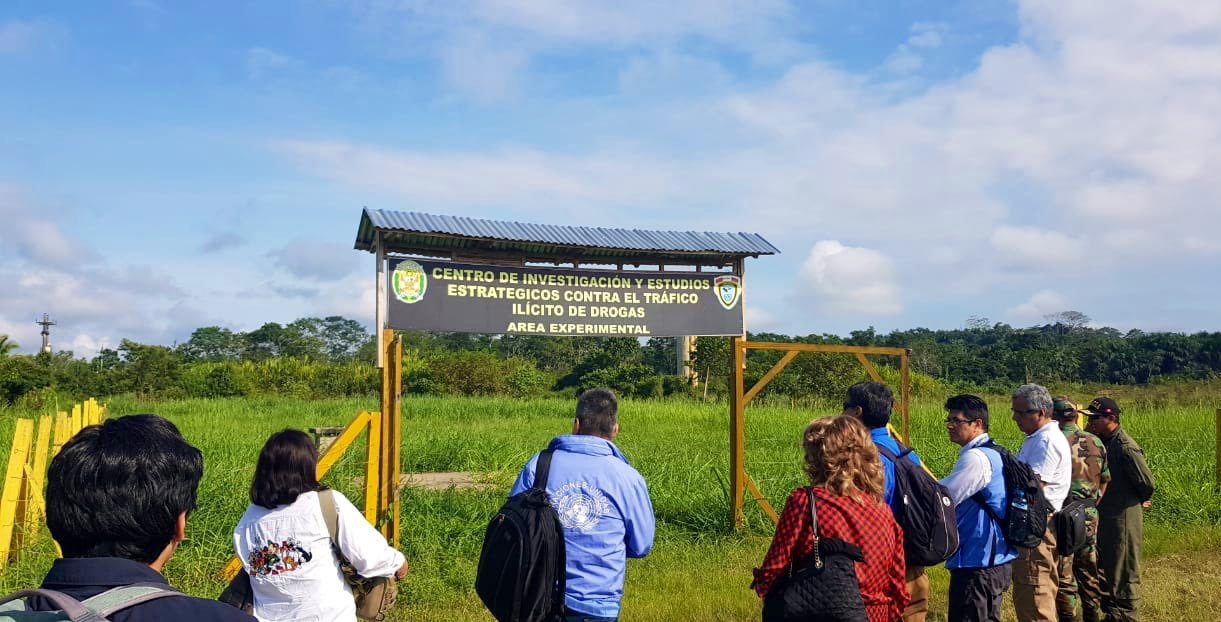 23 - 25 July 2019 -  UNODC officers from CRIMJUST and the Integrated Illicit Crop Monitoring System Project (SIMCI) travelled to Peru for a four-day mission to explore potential pathways to further support the country in its efforts to counter cocaine trafficking.

CRIMJUST first delivered a training for officers from the Anti-Narcotics Police in Peru (DIRANDRO) on existing international legal tools and procedures to control substances. Notably mentioned were the United Nations Conventions of Mérida, Palermo and Vienna which aim to prevent corruption, transnational organized crime, and illicit traffic of narcotic drugs and psychotropic substances respectively. This sought to provide participants with a better understanding of ways to acquire international judicial assistance as well as spur the anti-narcotics agency to engage regional counterparts when conducting investigations. A second part of the training focused on discussing the various genomes of the coca plant.

Additionally, a visit to the Santa Lucía Base of the Anti-Narcotics Police in Peru (DIRANDRO) helped CRIMJUST officers acquire a better understanding of Peru's infrastructure and technical capacities, as well as of the training and resources made available to law enforcement officers, to counter drug trafficking, with a view of identifying areas which could benefit from the UNODC's support. Representatives from the National Commission for Development and Life Without Drugs (DEVIDA PERU) and the US embassy in Peru were also present, which allowed for a fruitful discussion on potential areas for further collaboration.

This visit gave way to a series of working groups involving members from various sectors to discuss and share expertise and lessons learnt in the fight against cocaine trafficking. Themes explored included conceptual frameworks to quantify drug production and market availability, as well as methods employed to study cocaine trafficking routes. UNODC Representative, Hernando Bernal, stressed during his presentation on synthetic substances the critical importance of forensic laboratories. Indeed, at the forefront of the challenges posed by growing drug availability, is the diversification and constant innovation of methods of drug production of organized crime groups. Technological advancements and globalization have enabled criminal groups to fragment and outsource part of the cocaine supply chain, hampering law enforcement capacities' to effectively dismantle entire drug networks.

This mission joins various UNODC initiatives aimed to provide support to countries located along the cocaine route, including Peru, to reinforce regional anti-narcotic strategies.  Since 2013, cocaine manufacturing has continued to rise, increasing by 25 per cent alone in 2017 over 2016 levels.