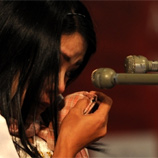 10 August 2009 - Last Thursday, on Bali, Indonesia, a jury of six eminent legal and human rights experts heard real-life testimonies of human trafficking, violence and exploitation at a symbolic trial organized to raise awareness about these issues in South-East Asia.

Among the witnesses was a young Cambodian woman. She told the first South-East Asian court of women on HIV and human trafficking of her search for a job overseas that promised to give her a decent salary. That journey took her from selling sugar cane juice on the streets of Phnom Penh to selling sex in Malaysia, where she worked in several brothels and even ended up in jail. During that time, she became infected with HIV. Although she is now back in Phnom Penh thanks to the intervention of an NGO, life is a daunting struggle for her.

Confronted with such testimonies, the members of the jury urged Governments, United Nations agencies, civil society organizations and others, many of which are converging on Bali for the Ninth International Congress on AIDS in Asia and the Pacific from 9 to 13 August, to urgently address the vulnerabilities of women to trafficking and HIV. The jurists underscored that responses should be rights-based and gender sensitive and that, above all, they should not revictimize.

At the end of the symbolic trial, the jurists said that "the vulnerabilities of women to human trafficking and HIV are rooted in the disproportionate human insecurity, poverty, illiteracy and disempowerment that they face in their daily lives". In addition to hearing the testimonies of women who have suffered at the hands of traffickers, the members of the jury listened to expert witnesses who presented data and analyses indicating that the dignity and rights of thousands of women from South-East Asia are being violated.

The event, organized jointly by several entities, including the United Nations Development Programme, UNODC, the Asian Women's Human Rights Council and Yakeba, a Balinese NGO, brought together leaders, politicians, activists and community members working to make a difference by empowering women and reducing their vulnerability to trafficking and HIV in South-East Asia. UNODC Global Coordinator for HIV/AIDS Christian Kroll said that "in addressing the dual challenges of human trafficking and HIV, we need to ensure that the voices of those women who are most affected are heard", adding that the court of women's effort to bring those "unheard voices to the public domain is laudable".

The following were members of the jury: Mieke Komar Kantaatmadja of Indonesia (Supreme Court Justice), Vitit Muntarbhorn of Thailand (professor of law at Chulalongkorn University in Bangkok and former United Nations Special Rapporteur on the sale of children, child prostitution and child pornography), Marina Mahathir of Malaysia (Steering Committee member of the Asia Pacific Leadership Forum on HIV/AIDS and Development), Annette Sykes of New Zealand (lawyer), Sylvia Marcos of Mexico (Director of the Center for Psychoethnological Research) and Esperanza I. Cabral of the Philippines (Secretary of the Department of Social Welfare and Development).