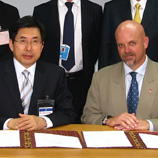 18 August 2009 - UNODC recently signed an agreement with the Korean Institute of Criminology to implement Towards AsiaJust, a programme that will contribute to combating all forms of transnational organized crime in Asia.

Sang-ki Pak, Director of the Korean Institute of Criminology, and Gary Lewis, UNODC Representative for East Asia and the Pacific, agreed in Bangkok to support the programme, which is modelled on EuroJust, the European Union's judicial cooperation unit, but will be tailored to fit the Asian context. The initiative will involve already existing entities, such as the networks of prosecutors, special investigators and central authorities in charge of mutual legal assistance and extradition procedures, as well as other highly specialized professionals.

The programme has been developed by senior staff members of the UNODC Regional Office for East Asia and the Pacific in consultation with authorities in charge of criminal justice in several Asian countries. The objective is to foster a common modus operandi among those in charge of combating transnational organized crime in the region, based on a clear understanding of the differences that exist between various judicial systems.

Since joining the United Nations Crime Prevention and Criminal Justice Programme network in 2005, the Korean Institute of Criminology (KIC) has collaborated actively with UNODC and other network members. KIC has been promoting cooperation and information exchange in technical assistance and research, in particular on human trafficking, drug trafficking, money-laundering, migrant smuggling and financial and economic crime.

In December 2007, KIC signed a cooperation agreement with UNODC to enhance the fight against cybercrime. As part of that agreement, four expert group meetings have been organized. At the most recent of these meetings, which was hosted by KIC and held in Seoul on 21 and 22 February 2008, the draft website of a virtual forum against cybercrime was presented. The forum aims to serve as a communication centre for cybercrime experts and to provide assistance to law enforcement bodies, criminal justice officers and researchers.