UNODC looks back at 30 years in Vienna 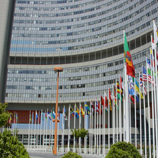 28 August 2009 - This year marks the thirtieth anniversary of the Vienna International Centre (VIC), the seat of UNODC headquarters. In August 1979, the VIC was officially handed over by the Austrian authorities to the United Nations, making Vienna the third United Nations Secretariat duty station after New York and Geneva.

In addition to housing UNODC, the VIC is home to various members of the United Nations family working for peace, security and development. As UNODC Executive Director Antonio Maria Costa, who is also Director General of the United Nations Office at Vienna, has said: "The VIC has become an international hub for human security issues."

The Fund was financed through voluntary contributions, mainly from Member States but also from private sources. It carried out research to obtain more accurate information about the extent of global drug abuse and assisted Member States in strengthening their national control and enforcement systems with regard to illicit drugs.

The first country-level project was implemented in Thailand, where the problems of illicit drug crop replacement, drug users' rehabilitation, education and law enforcement were receiving attention.

By the end of 1973, the Fund had committed US$ 5.6 million to 38 projects for law enforcement, education, information, treatment and rehabilitation, research, and crop replacement, notably in Afghanistan, Lebanon and Thailand.

A successful project was implemented in Turkey, as a result of which it became possible to control the licit cultivation of opium poppy in that country and thus avoid the diversion of opium poppy derivatives to illicit channels. Turkey ceased to be a source of illicit opium. The Fund was moved from Geneva to Vienna in 1979, as were the Secretariat of the International Narcotics Control Board and the Division for Narcotic Drugs.

In 1990, the General Assembly set up the United Nations International Drug Control Programme to coordinate international action in the field of drug control and, the following year, established the Crime Prevention and Criminal Justice Programme. 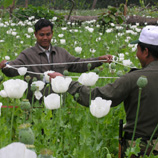 In 1997, the drug and crime programmes were brought together under the Office for Drug Control and Crime Prevention, which in 2002 became UNODC. In addition to implementing the United Nations' drug and crime programmes in an integrated manner, UNODC was established to ensure that the interrelated issues of drug control, crime prevention and international terrorism could be more effectively addressed in the context of sustainable development and human security.

Today, UNODC has about 500 staff members working at its Vienna headquarters and works in all regions of the world through an extensive network of field offices. It works with Member States in their struggle against illicit drugs, crime and terrorism through field-based technical cooperation projects, research and analysis, as well as normative work, to assist States in the ratification and implementation of relevant international treaties.

UNODC has become a major source of information on drug trends in the world, in particular through its flagship publication, the World Drug Report. Every year, the Report provides one of the most complete assessments of the international drug problem, with detailed estimates and information on trends regarding the production of, trafficking in and use of opium/heroin, coca/cocaine, cannabis and amphetamine-type stimulants. Governments, the media and intelligence agencies have also come to rely on the authoritative crop surveys generated by UNODC using satellite imagery and field research.