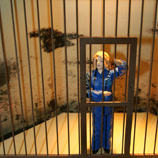 2 December 2009 - Female prisoners have significantly different needs than their male counterparts. Many suffer from the complications of raising young children living with them in prison, higher prevalence of HIV, post-incarceration stigma and sexual/physical abuse. At a meeting that was held in Bangkok from 23 to 26 November, organized by UNODC and hosted by the Government of Thailand, a new set of rules to improve the treatment of women prisoners was endorsed. The new draft rules cover such issues as the implementation of gender-sensitive prisoner classification and security risk assessments, the provision of gender-specific healthcare services, guidance on the treatment of children living with their mothers in prison, the specific safety concerns of women prisoners, the development of pre- and post-release programmes that take into account the stigmatization and discrimination that women face once released from prison. These are issues that do not receive sufficient attention in the Standard Minimum Rules for the Treatment of Prisoners adopted in 1955.

Speaking to UNODC earlier this year, Her Royal Highness Princess Bajrakitiyabha of Thailand said, "Women have special needs from men. It's time for the international community to join hands and exchange experiences and best practices."

The draft United Nations Rules for the Treatment of Women Prisoners and Non-custodial Measures for Women Offenders will be submitted to the Twelfth United Nations Congress on Crime Prevention and Criminal Justice, to be held in Salvador, Brazil, in April 2010 and - subsequently - to the Commission on Crime Prevention and Criminal Justice at its nineteenth session. If approved, the 70 new rules specific to women prisoners and offenders will become official United Nations rules and be used to improve access to justice, treatment, safety and social reintegration prospects for millions of women in the criminal justice system worldwide, as well as their children. 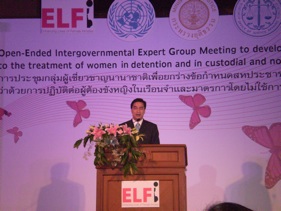 The meeting was attended by 40 experts representing 24 States worldwide. It was also attended by observers for the African Institute for the Prevention of Crime and the Treatment of Offenders and the International Scientific and Professional Advisory Council, both of which are members of the United Nations Crime Prevention and Criminal Justice Programme network, as well as the Office of the United Nations High Commissioner for Human Rights and the World Health Organization. Observers for the following organizations also attended: the Canadian Association of Elizabeth Fry Societies, Muslims for Human Rights, Pastoral Carceraria Nacional, Penal Reform International, Sisters Inside, Quaker United Nations Office and the Women's National Commission (United Kingdom).