Fake medicines in West Africa a health risk for all 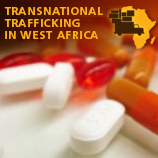 8 July 2009 - Counterfeit medicines not only deprive sick people of real treatment, but they make some of the world's most dangerous diseases stronger. West Africa has increasingly become the target of a range of counterfeit medication, including antibiotics, antiretroviral drugs and medicines to fight malaria and tuberculosis. Most of these fake pharmaceutical products, which appear to be genuine but contain little or no active ingredient, are imported, particularly from South and East Asia, but some come from the local pharmaceutical industry.

In a newly released report entitled Transnational Trafficking and the Rule of Law in West Africa: a Threat Assessment, UNODC looks at the impact of counterfeit medications in West Africa and how this impact is amplified by the very high demand for anti-infective and anti-malarial drugs. According to the World Health Organization's World Malaria Report 2008, Africa accounts for most of the world's malaria incidence, while West Africa has the highest estimated rate on the continent, with nearly 98 million cases of malaria per year.

As much as 50-60 per cent of anti-infective medicines tested in Asia and Africa have been found to have insufficient amounts of the active ingredients. Medicines with low levels of active ingredients pose a greater hazard than those with none, because substandard antibiotics and anti-malarial drugs can promote the development of drug resistant strains, or "super bugs" that can spread beyond the region.

A 2003 study of counterfeit chloroquine, an anti-malarial drug, showed not only that a high percentage of the sample failed to meet technical drug standards, but also that the counterfeits were spread evenly and widely, from district hospitals to local vendors and households. Groups producing these fake drugs target markets in developing countries where the capacity to detect defective products is low. This is further fueled by consumers who have virtually no purchasing power and no voice.

Smugglers replicate the packaging and even the holograms that appear on the boxes of the real products, often using the cheapest fillers with few ingredients. Medicines are also stolen for resale at lower prices, leaving consumers with no guarantee that the medicine has been handled or stored properly. Often, expiration dates are forged to lengthen the shelf life of old medicines. Supply routes for this method are similar to those for manufactured counterfeits.

The UNODC report shows that revenue gained from 45 million counterfeit anti-malarial medicines (worth $438 million), for instance, is greater than the gross domestic product of Guinea Bissau. It has been estimated that in 2010 this illegal market will raise about 75 billion dollars in revenues for smugglers, an increase of 92 per cent compared with 2005. Profits are high and the risks low. These profits fund organized crime and therefore represent a threat for all.

To combat this illegal market, UNODC is calling on rich States to stop using West Africa as a dumping ground for fake medicines. Private companies complicit in this trade should be named, shamed and banned, and codes of conduct more rigorously enforced. Governments should step up their regulatory efforts to ensure stricter control and enforcement of pharmaceutical regulations. Governments must also enforce their laws, drawing on the support of donors, regional partnerships and the support of international instruments like the United Nations Conventions against Corruption and the United Nations Convention against Transnational Organized Crime. It is time to intervene now before more lives are lost.

Transnational Trafficking and the Rule of Law in West Africa: a Threat Assessment (PDF)