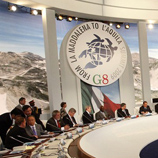 15 July 2009 - At the recent G8 summit in L'Aquila, Italy, leaders expressed concern about the converging threats of terrorism, drugs and organized crime. The leaders underlined the need to confront the "ever-increasing and destabilizing challenges" of terrorism, trafficking in persons, migrant smuggling, drug and firearms trafficking, cash smuggling, money-laundering and corruption. They said that their collective response to confronting these serious threats to domestic and international security would be developed within the framework of relevant United Nations conventions and protocols.

The G8 leaders noted that 2009 marks the tenth anniversary of the beginning of the negotiations that led to the adoption of the United Nations Convention against Transnational Organized Crime, also known as the Palermo Convention. This year is also the 70th anniversary of the birth of italian Judge Giovanni Falcone, who was killed by the mafia in 1992. "In recognizing Judge Falcone and other champions of integrity and security, we affirm our strong commitment to further promoting the full implementation of the Palermo Convention and its additional protocols," they said.

They reaffirmed their determination to fully implement the United Nations Convention against Corruption and to "utilize its framework to prevent international criminal networks, kleptocrats and terrorists from corrupting public institutions to advance their criminal goals, as well as to strengthen international cooperation in fighting corruption, including through the return of assets". They reiterated their commitment "to deny safe havens to corrupt individuals and their illicitly acquired assets and to prevent corrupt holders of public office from gaining access to the fruits of their illicit activities in our financial systems."

In their declaration entitled Responsible Leadership for a Sustainable Future, the G8 leaders called on all States to ratify the Convention against Corruption and for "a strong and consistent follow-up to the Bali Conference by ensuring effective implementation of the Convention, including the development of an effective, transparent and inclusive review mechanism". They also said that they would strengthen cooperation on asset recovery, including through the Stolen Asset Recovery (StAR) initiative, led jointly by UNODC and the World Bank.

With regard to political issues, G8 leaders reaffirmed their commitment to help States build capacity to fight organized crime, "particularly in cooperation with UNODC and other relevant international organizations". For example, they pledged support for ensuring the development of adequate legal frameworks to fight piracy and other maritime-related crimes and to attract resources, commitment and action to build the capacity of States to better control their coasts and territorial waters, contribute to maritime security and judge and detain pirates". These are all activities that UNODC is currently engaged in, particularly in Kenya.

Afghanistan and Pakistan were identified as a top priority for the G8. Leaders reaffirmed their commitment to promoting stability and development in both countries and the wider region, for example by strengthening capacity to counter terrorism, trafficking and crime. The situation in Afghanistan and Pakistan is an issue that took centre stage during the G8 Outreach Ministerial Meeting on Afghanistan, Pakistan and the Regional Dimension that took place in Trieste, Italy, on 26 and 27 June 2009.

At the Trieste meeting, UNODC Executive Director Antonio Maria Costa outlined the twin threats posed by opium and insurgency. He suggested that the most powerful instrument against those threats is development. He invited States members of the G8 and development institutions like the World Bank "to display in Afghanistan an economic power as forceful as NATO's military fire power". There was considerable support for UNODC programmes in the region, including for the UNODC-brokered Triangular Initiative promoting cooperation between Afghanistan, Iran (Islamic Republic of) and Pakistan.

At L'Aquila, G8 leaders welcomed the conclusions achieved in Trieste with regard to closer regional cooperation in, among other areas, border management and trafficking in narcotics and weapons.

In a separate declaration, on counter-terrorism, G8 leaders committed themselves to, inter alia, provide capacity-building and other forms of technical assistance to disrupt all possible links between terrorism and organized crime. This issue was the focus of the G8 Conference on Destabilizing Factors and Transnational Threats, held in Rome on 23 and 24 April 2009.

The Summit in L'Aquila Winds Up With the Chair's Summary