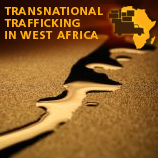 10 July 2009 - Ten per cent (around 55 million barrels) of Nigeria's oil is stolen and trafficked every year. In fact, it is estimated that oil production in Nigeria runs at only two thirds of capacity because of theft, vandalism and violence in the Niger Delta.

The new UNODC report, Transnational Trafficking and the Rule of Law in West Africa: A Threat Assessment, explores the practice of stealing and trafficking in oil, locally known as "bunkering", in the Niger Delta. It identifies the traffickers and trafficking routes, the value of the stolen oil and the threat posed by oil bunkering not only to Nigeria but to West Africa as a whole.

Criminal groups with links to militant groups in the Niger Delta carry out much of the stealing and trafficking in oil. Oil is stolen either by "hot tapping", where an unauthorized secondary pipeline is attached to a company mainline in which the oil is flowing under pressure, or by "cold tapping", which involves blowing up a pipeline and putting it out of use, which gives criminals enough time to attach their spare pipeline.

The stolen oil is loaded onto barges and tankers and sold in Nigeria and the surrounding region (in Ghana, Cameroon, Cote d'Ivoire, even South Africa). It is less clear how much reaches the international market further afield. Proceeds from the oil bunkering go directly to militants and corrupt officials.

Oil is also stolen through corruption: vessels are filled or over-filled through payments to officials controlling export. Some officials from the military, private companies and local government have also been reported to be involved.

Oil bunkering is a crime that enriches a few criminals, insurgents and corrupt officials, while impoverishing many. It undermines the rule of law, deepens corruption, pollutes the environment, violates human rights and depletes natural resources. It has become a transnational criminal enterprise in its own right, and the violent political struggle provides a convenient smokescreen for those intent on personal enrichment.

The wide range of players involved in bunkering and the complex web of their alliances makes it difficult to discern the victims from the perpetrators. The loss of oil revenues - perhaps one third of the income on which 80 per cent of the Nigerian national budget is based - means that, aside from a few well-placed individuals, Nigerians are net losers.

Nigeria is an economic powerhouse and home to half the population of West Africa. Illegal oil trade therefore poses the greatest threat to the rule of law in the region. It directly destabilizes the most powerful economy in the region, with implications far beyond the Niger Delta.

Transnational Trafficking and the Rule of Law in West Africa: a Threat Assessment (PDF)