Initiative to curb trade in chemicals for illicit drugs 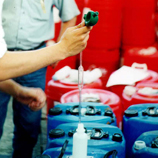 4 September 2009 - The trafficking in chemicals required for the manufacture of cocaine, heroin and stimulants such as amphetamine, methamphetamine and Ecstasy (commonly referred to as precursors) is of particular concern to countries in Latin America and the Caribbean.

The dynamics associated with both the chemical substances themselves and the methods of diversion (mostly from licit trade) are complex and constantly evolving as traffickers seek new ways to avoid international trade controls. Limited knowledge and capacity to share information on the production, types and quantity of chemicals currently being used, as well as on trafficking modalities, hamper control and enforcement at the regional and national levels.

It is within this context that UNODC and the European Commission have partnered to launch PRELAC, a three-year project to strengthen the capacities of national administrative control authorities to prevent the diversion of precursor chemicals from the licit market into Latin America and the Caribbean.

PRELAC builds on an earlier regional project of the European Commission for precursor control in the Andean countries, and will cover 12 countries in Latin America and the Caribbean, namely Argentina, Bolivia, Brazil, Chile, Colombia, Ecuador, Jamaica, Mexico, Panama, Peru, Trinidad and Tobago and Venezuela. UNODC is the partner organization appointed by the European Commission to implement the activities that will be undertaken by the field offices in Mexico and Peru.

At the inaugural seminar in Lima, Peru, held from 20 to 22 July, delegates from the participating countries, including representatives from chemical operators, discussed and agreed to a timetable of regional activities.

These activities include: establishing a web-based system of information exchange between all participating countries; standardizing precursor control mechanisms and legal frameworks; improving inspection and investigation techniques; developing synergies between the control agencies and chemical operators in both the public and private sector; and enhancing the effectiveness of customs administrations in the control of precursor chemicals.

One of the initial activities will be a technical assessment of the European Commission's  regional project for precursor control in the Andean countries, and other national administrative precursor control systems. This will be complemented by an adapted UNODC national drug control system available in most participating countries, and extending connectivity within and across regions via an website between the producers of precursors and transit and destination countries.

Another key activity is a baseline study of the trafficking routes and dynamics associated with the chemicals currently used in transforming coca leaf into cocaine. This particular study will assist participating countries, as well as international organizations and other decision makers, to propose appropriate and effective preventive measures. The trafficking of ephedrine and pseudo-ephedrine will be the subject of an additional regional study.

PRELAC is being implemented in consultation with the participating countries and in collaboration with the Andean Community and the Caribbean Community. Other relevant regional and international organizations will also be involved.

A steering committee has been established. National and regional expertise and best practices will be utilized and training delivered to multi-agency groups either on a bi-national or trans-regional basis as a means to encourage regional cooperation, teamwork and information exchange.

With the support and collaboration of chemical operators, PRELAC will enhance the capacity of the national control authorities in Latin America and the Caribbean to achieve measurable results and enable the targeting and seizure of diverted precursor chemicals and the prosecution of those responsible.