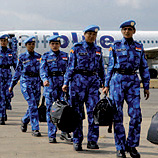 UNODC and the Department for Peacekeeping Operations have partnered to publish a revised edition of the United Nations Criminal Justice Standards for United Nations Police.

The handbook summarizes the international human rights and criminal justice principles that United Nations police personnel must know, abide by and promote when deployed in peacekeeping operations and special political missions. As such, it is designed to serve a dual purpose.

Firstly, it is a code of conduct for police operating under the United Nations flag. Secondly, it is a reference source to help national authorities to improve policing. The first edition of this handbook was published in 1994 in the six official languages of the United Nations and has been used in training courses for the police components of United Nations missions in countries such as the Democratic Republic of the Congo and Mozambique.

Among the areas covered in this handbook are the role of police and other law enforcement officials, different types of crimes, investigation, arrest, detention and imprisonment. The handbook also covers trials and extralegal arbitrary and summary execution.

This updated edition includes areas not covered in the first edition, such as the issue of the integrity of police and other law enforcement officials, assistance to victims (in particular child victims) and children in conflict with the law. It incorporates new criminal justice standards that have been developed in the past 12 years that should be taken into consideration by United Nations police personnel.

It is hoped that the handbook can help the men and women who serve the United Nations to uphold these standards and norms in their work and contribute to building security, justice and the rule of law for all.