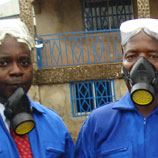 1 April 2010 - Television police dramas have glamourized the work of crime scene detectives. A DNA sample, fingerprint or bullet discovered provides the key piece of evidence to determine the guilt or innocence of a suspect. But in real life, according to Justice Tettey, Chief of the UNODC Laboratory and Scientific Section, "too often, evidence is either collected or stored improperly. As a result, it can not be used in court, and a case falls apart".

"If things are messed up at the crime scene, even the best lab does not help", adds Mr. Tettey. Conversely, basic training and equipment can significantly increase the capacity of countries to collect valuable evidence, and improve scientific analysis of drugs and crime. That is why UNODC is stepping up its forensic services support programme.

For decades, UNODC has provided drug-related forensic and scientific support from its office in Vienna. For example, it provides drug reference samples to ensure reliable and accurate identification of drugs and precursors. "You would think that everyone would analyse a sample in the same way, but that is not always the case", says Mr. Tettey. "Recently, we sent a sample of seized heroin to several labs around the world to test its purity. We got back results (including from some labs in Western Europe) that ranged between 40 and 90 per cent, when in fact it was 60 per cent". 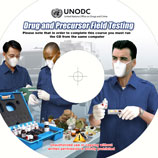 To build capacity and standardize procedures, UNODC produces drug analysis manuals, guidelines on forensic best practices and training materials. It also produces drug and precursor field kits for on-the-spot analyses. "With these kits, even one border guard in a remote location can figure out if a suspicious substance actually contains drugs or precursors, the chemicals used in the manufacture of illegal drugs", says Mr. Tettey.

UNODC forensic work is not only done in labs. Sometimes, UNODC is called upon to provide expertise in the field.

Last summer, UNODC staff were invited to inspect some suspicious chemicals in Guinea. "With the political turmoil in the country, rumors were flying", says Mr. Tettey, who took part in the mission with staff from the International Criminal Police Organization (INTERPOL). "When we entered an uncompleted building just outside of Conakry, I saw the high-pressure vessels and the safrole oil (a precursor chemical used in the manufacture of "ecstasy").

UNODC and INTERPOL discovered precursor chemicals at eight sites around Guinea that could be used to manufacture drugs with a street value of over US$ 100 million. "It is very possible that there are other sites in West Africa", warns Mr. Tettey. "The priority is to ensure that Member States dispose of chemicals as quickly, safely and efficiently as possible - to avoid diversion", he adds.

UNODC is also diversifying its forensic work to focus more on crime and not just drugs. "We need to move with the times", says Mr. Tettey. "States are asking for help to deal with the growing threat posed by organized crime. Criminals are quick to adapt, so we need to help States keep pace, for example to crack down on identity-related theft and counterfeiting". Scientific and forensic services are therefore being integrated into UNODC regional programmes. "Member States always talk about the importance of evidence-based policy and operations: forensics is key to gathering that evidence", says Mr. Tettey.