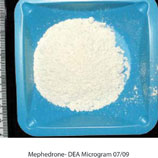 7 April 2010 - The use of mephedrone, a synthetic drug often touted as a legal alternative to amphetamine or cocaine, has become widespread, with increasing reports coming from Europe, North America and Australia. Mephedrone, also known as "drone", "miaow miaow" or "M-cat" , is not under international control, and the true extent and patterns of its use are unclear and probably underestimated.

"So far, little is known about this drug as it currently appears on the illicit market," says Beate Hammond, manager of the UNODC synthetic drugs programme, "and even small amounts might pose a danger to health. There have already been reports of mephedrone-related deaths."

Usually sold as a white or off-white powder, mephedrone's effects are reported to include increased euphoria, alertness and restlessness. Mephedrone is frequently sold via the Internet as plant food, purportedly for uses other than human consumption. Mephedrone and other synthetic compounds, like naphyrone, which is reportedly being targeted for the European drug market, are manufactured to produce similar effects to those of internationally controlled substances like cocaine. However, because of the chemical differences, there are often no legislative restrictions on their manufacture and distribution.

As mephedrone is relatively new to the market, there is little existing research into its effects, pharmacology and toxicity. In Europe, the substance is being investigated by the European Monitoring Centre for Drugs and Drug Addiction and the European Police Office (Europol), which are expected to produce a joint report on the issue by July.

See more coverage on mephedrone in the latest issue of the Global SMART Update.