Gleams of hope from prison 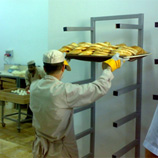 "I don't know how I ended up here", says Saed, a 35-year-old inmate at the Reform and Rehabilitation Center in northern Nablus in the Occupied Palestinian Territory.

The ache in his voice reveals the pain that two years of pretrial detention have left on a man who maintains his innocence. Despite being in constant worry about the family he left behind, Saed still hopes to be released soon. Most of the other 228 fellow inmates at the rehabilitation centre share Saed's anxious wait for a final verdict about their cases.

The rehabilitation centre is one of the many correctional centres and prisons found in the region. They all face the same challenges: dilapidated buildings, overcrowding and insufficient budgets. Activities inside rehabilitation centres are very limited. Most inmates are confined days on end, with only their thoughts to keep them company.

For Saed, a glimmer of hope in these desperate circumstances came in April 2010 when the centre's administration asked him and his fellow inmates if they would like to join a vocational training programme, initiated with support from UNODC. Saed did not think twice. "Choices here are so limited", he says. He saw it as an opportunity not only to get some useful training but to have the chance to get some fresh air away from the crowded cells.

All the inmates who chose to join the training participated in a bakery training for four weeks. "The prison became a different place, a place where I can learn something new, even if it is how to make bread!", says Mohammed, 26 years old, another participant of the workshop. "This training makes me think that I may be a good baker one day, and it gave all of us the chance to get to know each other and to share our problems. This is my chance and I will not waste it", he added.

Since April 2009, UNODC, funded by the Government of Canada, has been supporting the General Administration of Reform and Rehabilitation Centers (GARRC) to strengthen the management, operation and oversight of civil prisons.

"Before the UNODC project, we had no reform programmes and training courses in prisons. We have been waiting for this chance for a very long time. All inmates are now looking at the bakery training as a unique opportunity that they want to participate in", says Major Qadri Sawafta, the director of the Nablus reform and rehabilitation centre.

Major Sawafta is convinced that the prison administration is on the right track leading towards genuine reform, encouraged by its leadership and supported by international stakeholders.

In addition to the assistance provided in rehabilitation of buildings, leadership trainings and healthcare, UNODC supports general staff training through curriculum development and Training of Trainers. Once the trainers complete their sessions, they move on to train their colleagues on issues such as human rights standards in prison settings, the role and tasks of correctional officers, and modern prison management.

In July 2010, and following extensive training and consultations with UNODC, GARRC presented its medium-term strategic plan (2011-2013), which provides a comprehensive development road map structured around its vision of "secure, safe and humane reform centers to change the behaviour of inmates, as well as to improve their ability to effectively and productively reintegrate into society". UNODC remains committed to support GARRC on its way to make this vision a reality.