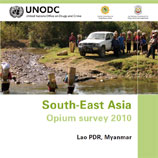 13 December 2010 - The 2010 South-East Asia Opium Survey was released today and shows a surge in opium cultivation in the region over the past year.  Combining the UNODC Lao PDR and Myanmar Opium Surveys as well as information on poppy cultivation in Thailand from that country's Office of the Narcotics Control Board, the Survey points to rising levels of opium poppy cultivation across all three countries.

It also highlights the continued high opium prices seen in recent years.  For 2010 the potential value for opium production in South-East Asia rose dramatically to US$ 219 million - an increase of US$ 100 million over the 2009 estimate, and a monetary jump of 82%.

The Survey shows that while opium poppy cultivation in South-East Asia remains well below the peak figures of the mid-1990s, the year-on-year increase over the past four years, from the low point in 2006, has been relentlessly upward.

In releasing the Survey, UNODC Executive Director Yury Fedotov noted: "While Governments have increased their eradication efforts, the potential opium production in 2010 is estimated to have increased by approximately 75 per cent when compared to 2009."  As a result of the overall larger areas cultivated with the crop in all three countries and higher yields in Myanmar the production levels in Myanmar shot up the most significantly, from 330 metric tones (mt) to 580 mt, while Lao PDR's levels rose by 7 mt to 18 mt in 2010, and Thailand increased by 36% from 3 mt to 5 mt.

On the causes of these increases, Mr. Fedotov stated: "Poverty and instability are two of the drivers which push farmers to grow - or sometimes return to growing - illicit crops".  Regrettably, while progress has been made in reducing poppy fields over the past decade, the recent global economic crisis appears to have exacerbated the situation for poor communities and tempted many to enter the drug market.  The rising price of opium over the last few years has also been instrumental in making opium cultivation an attractive option for many.