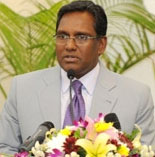 1 February 2010 - The Government of the Maldives recently signed with UNODC its first ever country-specific technical cooperation project to combat drug abuse in the country. The project, funded by the European Union, will strengthen the Maldives' national response to drug-related issues.

The UNODC Regional Office for South-East Asia interviewed the Vice President of the Maldives, Dr. Mohamed Waheed, on the Government's expectations of the project, the challenges posed by drugs in the Maldives, and the steps that the Government has taken so far to address drug-related challenges.

UNODC: What are your expectations of this technical cooperation with UNODC?

Vice President: Signing the project document is a major step ahead for the Government. This is the first country-specific, comprehensive drug prevention programme with UNODC funded by the European Union. UNODC has in the past provided technical assistance to the Government to develop and launch in 2008 the first national "drug control master plan for 2008-2012".

This new project will provide technical assistance to strengthen the national response on drug use prevention and treatment through a series of capacity-building measures both with the Government and civil society in the framework of the United Nations Development Assistance Framework. I hope the project will most importantly achieve a coordinated response among the Government, donors, experts and civil society groups to the problem of drug use and sensitize NGOs, law enforcement agencies and especially the judiciary on legal and policy barriers that impede access to quality drug prevention services.

UNODC: What is the status of the drug problem in the Maldives?

Vice President: Since the first case of heroin abuse was detected in 1993, drug use has escalated among the youth. Injecting drug use is also on the rise, and while the HIV epidemic is in its early stages, this is likely to exacerbate it. The National Health Policy of the Maldives recognizes this as one of its major challenges. Drug addiction touches nearly every family and the Government. Another dire need is drug treatment in prisons. Prison authorities in the Maldives estimate that 80 per cent of the inmates need drug treatment.

UNODC: You are known for taking leadership in positioning the drug problem on the national policy agenda. In August 2009 you organized the Future Search Conference for a drug-free Maldives. What motivates you to work on drug prevention in the Maldives?

Vice President: In 2009, substance abuse eradication became a major pledge of the Government, which formulated a five-year strategic plan in consultation with all stakeholders present at the Future Search Conference. We need to collaborate with NGOs, relevant departments of the Government and the UN agencies - that is the only assured way of dealing with this problem.

I am motivated because being in a position of leadership and authority, it is my responsibility to the Maldivian society that I take this opportunity to convey messages on prevention of drug use and push for comprehensive drug policies and change. Being in a leadership position I can help improve inter-agency coordination, give hope to my people, convince policymakers on drug prevention programmes and begin new initiatives.

UNODC: What other measures is the Government of the Maldives putting in place to address drug related issues?

Vice President: The Maldives has porous borders and covers an area of 500 kilometers. It has 1,100 islands, out of which 200 are inhabited. All these reasons make it difficult for the Government to constantly patrol its borders and provide surveillance. However, networks and air surveillance systems are being set up and the coast guards' capacity strengthened. Still the country is at risk of transnational organized crimes like trafficking of drugs and smuggling of migrants to Maldives.